Previously on RuPaul’s Drag Race, the queens were paired up to appear on the hit new talk show Bossy Rossy – hosted by the king, Ross Mathews obvi – where The Vixen’s attempted shadiness backfired and Eureka and Aquaria stole the show. She on the other hand bombed badly, though not compared to Mayhem and Monet who were overshadowed by their partners and landed in the bottom two. Again. With poor Mayhem finding herself Miss Vanjie-ing out of the competition (I the same way her bestie Morgan McMichaels did in season 2).

The queens returned to the workroom to process the latest elimination slash killer lip sync of Monet where poor Kameron was feeling alone as the only quiet girl left in the competition. Monet then pointed out that Mayhem wasn’t the only thing she murdered on the mainstage, with her look also being destroyed. Thankfully Monique stepped in to remind her on behalf of Michelle and the audience that maybe now she was buy something that fits. Though the queen confusing giraffe and cow print probs shouldn’t be throwing the first stone. In any event, Eureka was shocked Monet wasn’t bringing it to the competition and Cracker was sick of being the Susan Lucci of season 10.

We returned to the Werk Room the next day where Monique’s laugh was slowly becoming as iconic as Miss Vanjie … before Ru interrupted to announce this week’s mini challenge, Sitting on a Secret – featuring Aja, Milk, Morgan, Thorgy and Chi Chi’s hit song – where the queens were required to identify items by sitting on them. While the eggplant and traffic cone were definitely my faves, the site of Kameron’s legs rubbing against marshmallows flooded my damn basement. In any event, Asia proved to be the most successful bottom and snatched victory by the skin of her taint. Sadly for her, that didn’t give her the chance to be shady with selecting the groups for this week’s maxi challenge where the girls would be required to throuple up and conduct Drag Con panels for either body, face and wigs. The queens then got to work selecting their own teams with Monet and Kameron buddying up by default for being the bottom or quietest, joined by Eureka who had a good feeling about them and the body concept. A cocky Asia was joined by Aquaria and Monique for face, and Cracker, The Vixen and Blair serving wigs.

Team body-ody-ody quickly put Eureka’s prior Drag Con experience – and big mouth – to good use, assigning her the role of moderator and coming up with a concise plan and creating the word proportionising – creating the perfect silhouette. While Monique and Cracker weren’t sold on their rival’s tagline, it was catchy and they really should be shaking. Aquaria and Asia sold Ru on their make-up skillz, he was quick to point out that they needed to be able to make it funny and joyous for their audience if they want to be successful. Meanwhile team wigs had an impressive resume with wigs, however lacked a plan and didn’t seem to think having Cracker out front as a host was a good idea. Back with the body queens, my future lover Kameron spoke being one of the few bodybuilder queens and felt it gave her an edge as it allows her to show people how to feminise even the hottest body. With Ru out of the room, Monique started to panic about Aquaria since she isn’t the best at public speaking and thinking on her feet. Asia sounded like a HR manager when joining in to question her communication skills.

Elimination day rolled around with Eureka rallying her fellow body troops, getting Monet out of her head for being a serial bottom – we’re all bottoms, relax. Meanwhile Blair made a play for my heart, pulling out a study book she put together for her Drag Race stint which she said has given her confidence for the challenge. Monique then shared that she didn’t have as much money as the other queens, so in addition to having to prepare for the panel was Macgyvering herself an outfit for the runway. Hearing the yearnings of my crotch we returned to Kameron where Asia spotted a before and after shot of his body – I’d take either TBH – and shared how he had quit and threw out half his drag when he was with a previous boyfriend, and then struggled with the other queens when he returned to performing given his manly physique. Thankfully he didn’t pay attention to the haters and said everyone should be able to throw on a dress and wig no matter what their shape and perform for people, and now I’m both inspired and aroused. Monet then shared about her relationship with her parents with Cracker. While everyone else in her family knows she is gay and does drag, her parents live in the West Indies and aren’t very open to drag or homosexuality. And she is scared of losing them. I’m not crying, you’re crying.

The panels kicked off on the mainstage with Eureka leading the body team to a killer performance, working seamlessly together while being informative and entertaining. By the time it came to Kameron dressing Bryce, I wanted everything they were selling. While Monique got off to a strong start for team face – Danny Glover illusion is the best way to describe Asia’s look – Asia and Aquaria’s duelling tutorials got extremely confusing. Thankfully for them the directionless wig team never really seemed to find their footing, instead focusing on reading each other for filth.

On the runway Kameron was absolutely stunning and gave the best head. Monet and Eureka joined her in stealing the show with killer looks that belonged side of pool watching a fight on Dynasty. Aquaria pulled a hat out of her rabbit and looked amazing, Monique served spotted realness, Asia made a stunning dandelion, Cracker had beautiful hat hair, Blair served ‘90s privacy curtain realness while The Vixen layered hat upon hat upon hat.

As expected team body won the challenge, while team wig bottomed out. The judges adored Kameron’s look and loved that she brought more of her personality to the challenge. Monet finally found her feet with a killer look and slaying the panel. Eureka stole the show as the moderator and with her David Jones one piece. While the judges loved Cracker’s look, they felt the panel offered no lesson and none of her jokes landed. The judges completely lost Blair in the panel and felt her look was beige … leading to her sharing that she lost her virginity via rape and brokedown as she just wants to make everything positive as a result. The queens and judges rallied around and AGAIN, I’m not crying, you’re crying. Back to the critiques, The Vixen’s outfit was read for being sloppy and her panel performance was again called out for not offering enough.

Once again Eureka took out victory, while Cracker narrowly escaped the bottom leaving Blair St Clair and The Vixen to lip sync to my girl Diana Ross’ I’m Coming Out. While Blair hit every lyric and twirled like your mum after a couple of glasses of sav blanc, The Vixen owned the lip sync with her acrobatics and air trombone. As such, The Vixen saved herself leaving Ru to declare my dear Blair St Clair must sashay away.

While she was heartbroken to find herself out of the competition, she was thrilled to have just had the opportunity … and to be the first queen from Indiana to compete. While I would argue that The Vixen’s outfit was the most inferior on the runway, she murdered the lip sync. Though I didn’t share that with dear, sweet Blair, insteading focusing on her strong run and a big piece of sweet Blair St Clafoutis. 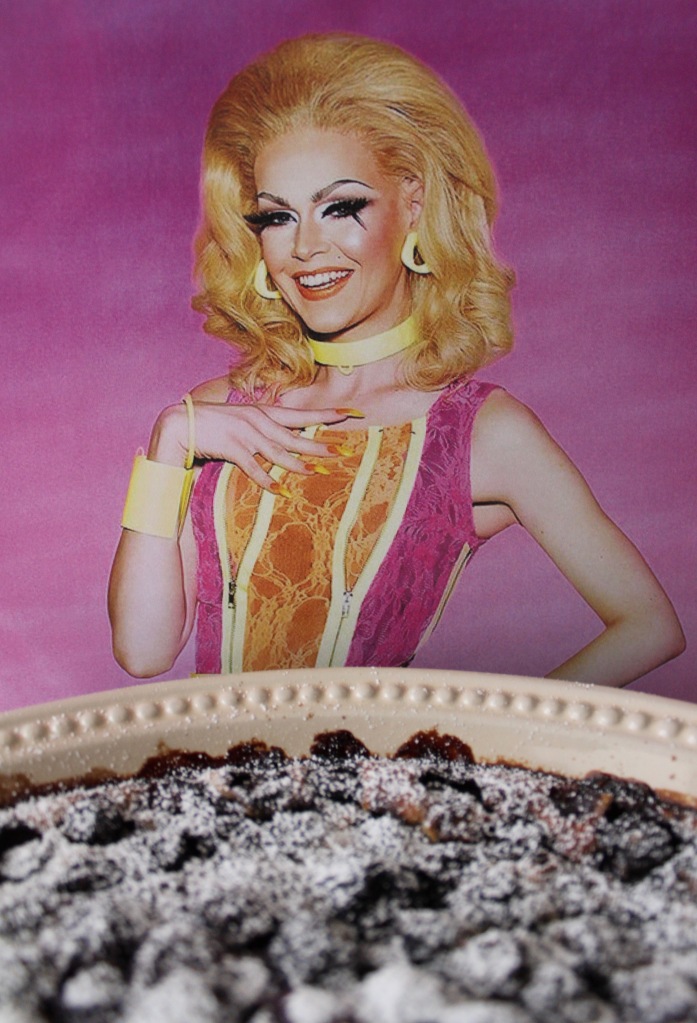 I love me some clafoutis, despite the fact Julia Child loves to remind me it is peasant food. I mean, baked, custardy pudding full of nuts and fruit – perfection. I mean, it sounds like a euphamism for the things I’d like to do to Kameron Michaels.

So enjoy! The clafoutis and the thought of me and Kam.

Combine the milk, ⅓ cup of the sugar, eggs, vanilla, salt and flour in a large bowl. Whisk aggressively, working through the pain of your boot, until completely smooth.

Allow to cool for five minutes before serving with a dusting of icing sugar and devouring.