Previously on Survivor my boy Probst met 20 new castaways in the middle of the Fijian for a biblical battle, with the underdog David tribe taking out the first reward of the season. Meanwhile over on the overachieving Goliath tribe hot cop Dan and Kara met each other and instantly fell in love because they are beautiful. Their luck continued, with Dan then finding the first idol of the season. Meanwhile over at the David tribe things were looking bad for Nick, who was left right out and set to be the first boot after they lost immunity. Thankfully for him – and horrifically for everyone – there was a freak accident in the boat after the challenge, doing such a number on Pat that he was evacuated as the first boot.

That night back at camp things continued to be miserable as the weather took its toll on everyone, unable to start a fire or stay dry and TBH. Things were just as bad, if not worse, at the Goliath tribe they too were pelted with rain and their tribe flag was lucky not to blow away. Things were no better the next day as everyone shivered and started to break down as they desperately tried for a fire. Thankfully there were glimmers of hope as Christian and Nick went out in the wet to try and find something to find something to start fire with and/or eat. That obviously led to them talking strategy and lamenting being out of the loop on the potential last vote, and as such quickly aligned. And while I’m already loving this underdog story, Nick then spoke about the fact he was probably meant to be voted out last night and as such he is going to fight to win or die trying and damn there is something likeable about him. Probably his eyes. They then geeked out finding bamboo to reinforce the shelter and naming their alliance, unaware this isn’t Survivor. They arrived back at camp to discover that Bi had dropped by treemail where they discovered a fire making kit and tarp to ensure nobody dies.

The Goliaths too, recieved said kit and tarp and the mood appeared to champ instantly. Dan and Kara took a moment to discuss finding the idol and partake in some generic flirting. Which did not go unnoticed – much to Kara’s chagrin – with Jeremy and Alec plotting to split them up and Natalie warning her to tone it down for her safety. Wanting to work around the situation, Kara approached Angelina and Natalia to assure them that she is interested in forming a black-widow brigade, stringing their respective men along and taking them out one after the other. After taking out Queen Natalie and Mike, obvi. Speaking of Mike, he was keeping watch as Jeremy rifled through peoples drying clothes and found Dan’s idol, which Kara had warned him to be more careful with. As such, Natalia and Kara are not the only two other people that know and as such, Mike and Jeremy’s stock just went up.

Things were looking up at the David tribe too, where Davie had decided to continue providing for the tribe after his epic octopus catch.  Whilst hunting for more food, he inadvertently found a hidden immunity idol and bless him, he deserves it. Particularly for saying this smells like authentic idol leather, begging the question, is that what my couch smells like? Meanwhile Carl was lamenting the loss of Pat and decided that the no longer can afford to lose Nick, instead wanting to take out Lyrsa, who he decided was the weakest. While Nick loved that idea, Elizabeth was pissed that her best buddies name was being thrown about. As was Lyrsa who desperately wanted to scream them all down, explaining she is the reason they won the first challenge.

Over at the Goliaths Jeremy and Alec continued to look sexy in their underwear before Jeremy instantly became my favourite by stripping down. And hot damn, I need a minute. Back in the camp Natalia was getting a nose and teeth booger check from Angelina, under the watchful eye of Natalie who obviously thought it was fucking stupid. Boogers in your teeth? Childish. Queen Natalie continued to lay low, watching everyone work and sassing them as much as possible. Sadly for her, people did actually notice her and were growing tired of her bullshit. Except for King John, the George Bushy of Tushy, who thought she was a great person to work with. John pulled Natalie aside to warn her about her attitude, leading to her approaching people one at a time and questioning their decision to target her, given she is a non-threat. While everyone decided the drama was too much for them, Jeremy pulled her aside to tell her some hard truths about her lack of self-awareness. Which she refused to accept, driving Jeremy mad and locking in his resolve to get rid of her.

Dear Jeffrey finally returned to screen for the immunity challenge where he explained to the Goliath tribe that Pat was injured after the last challenge, and therefore, someone is still potentially going to be the first one out. Anyway, the challenge. One person from each tribe was required to climb up a ladder to release a key, which would be used to retrieve a bag of puzzle pieces before solving said puzzle on a wobbly table. Given that in addition to immunity they would get a huge fishing kit, Davie the provider was totally pumped. Alec got the Goliaths out to a huge lead over Bi and the David tribe, allowing they to go out and grab the puzzle pieces and return to shore before Bi reached the top of the ladder. The Goliaths continued to work on the puzzle while Bi was abandoned at the dock collecting puzzle pieces while their boat drifted away. Given the puzzle seems insanely hard the Davids quickly caught up as everyone dropped their platforms and destroyed their work. Thankfully the Goliaths put everyone out of their misery after an hour, solving their puzzle and snatching immunity much to everyone’s exhausted relief.

Back at camp the Davids lamented their loss before Bi desperately gave them all a peptalk to get their head in the game. Bi and Jessica locked in their vote for Lyrsa, though given how cagey they were being when Gabby approached them to discuss tribal, she decided to go and find a plan she feels safer with. Speaking of feeling safe, besties Elizabeth and Lyrsa desperately tried to find some for the latter, identifying Jessica as the better target. They then approached Gabby who was concerned they wanted to target her, so was all in when they suggested getting rid of Jess instead and taking out Bi and Carl’s closest ally. Elizabeth pulled Christian in with a hug – literally – and locked him in for the vote against Jessica. Christian and Gabby discussed the plan and locked in their alliance together, before Christian approached Nick. Who tragically wasn’t interested and would prefer to take out Lyrsa.

With that we obviously arrived at the insanely beautiful, grand tribal council where Jeff questioned how they could handle the cyclonic weather, which they all said brought them together. Elizabeth admitted that those bonds would make the upcoming votes more difficult, though Lyrsa admitted that you can cut the tension with a knife back at camp. She then spoke about having heard her name for being a weak link, which made Jessica sass her for not playing the game hard enough if that is the case. Gabby suggested people shouldn’t underestimate anyone, Bi said she was voting on performance despite bombing the immunity challenge, Christian spoke about the votes all being organised and Nick admitted that the game was built on deceit so that they need to build trust where they can. After a discussion of the battle between playing a tribal vs individual game, everyone shared our nervous they were though Jessica did admit that it was exhilarating. With that, they voted and it turns out tribal wasn’t as exhilarating as she would have hoped, becoming the second – slash technically first – boot.

To be honest, I shouldn’t be shocked by the turn of events that led to her demise. Despite such a strong start last episode, I had menu-planned for her to be devouring pizza in Ponderosa and as such, she would be doomed to be a pre-juror because of my curse. I held her in my arms while I cried uncontrollably while repeating sorry, which let’s be honest would have been a terrifying experience for our child contestant. Thankfully she took her boot in her stride – no doubt thanks to the extreme pity she felt for me post meltdown – and said that while the curse definitely doomed her, she couldn’t be grumpy when it is delicious as my Spinach and Jessicartichoke Peetzza. 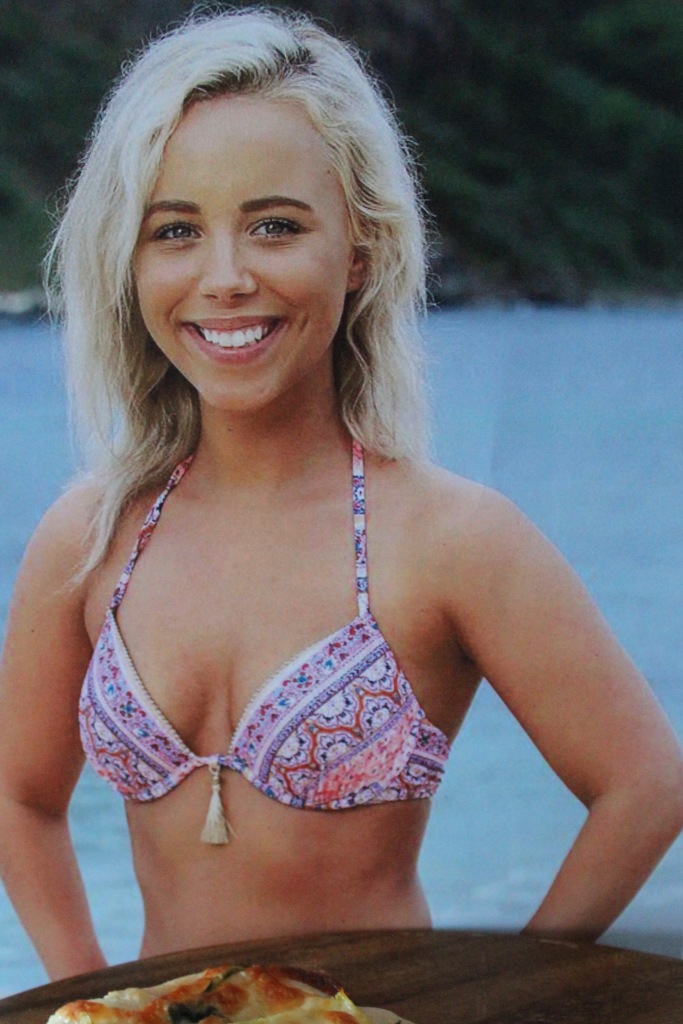 Just like the majestic Scot Pollartichoke Dip before her, there is no greater culinary pairing that spinach and artichoke. Particularly when in the company of cheese. Add in the glory of fresh, pillowy pizza dough, and it is hard not to be in heaven.

Combine the mayo, sour cream, parsley, garlic and lemon in a bowl and generously smear over the pizza bases. Top with spinach, artichokes and parmesan before adding some mozzarella for good measure.

Devour immediately, hoping not to burn our mouth with some scalding cheese. Because that would just add too much unwanted salt in your wounds.