With the frontrunner Khrystyana out of the way, Jeana – the Kennedy Davenport of the season – and Kyla – who better be the damn Trixie – received final critiques.

While Kyla received lukewarm praise for her walk, the judges agreed that she she sold the clothes to everyone which is ultimately what a model is employed to do. Tragically the judges loved Jeana’s walk, but thankfully read her for filth for abandoning the kid at the end of the runway and for only ever thinking about herself.

The judges loved Kyla’s body of work after finding herself mid-way through the competition, though were concerned about her early work. Jeana on the other hand was read for starting strong before dipping and getting stronger again. Ultimately the judges loved Kyla’s growth and potential while they were conflicted by Jeana, acknowledging that while she slays she isn’t moldable, won’t go beyond being Jeana and can be difficult.

With that, Tyra finally made a decent decision and crowned Kyla as America’s Next Top Model before Jeana offered an extremely insincere apology. Though given she had literally just lost the competition – again – I will go soft on her. Particularly since she showed a rare moment of humility as she lamented said loss.

While it is abundantly clear the producers gave Jeana a terrible edit, the fact is she did say all the awful things she said throughout the season. So yeah. That being said, she is beautiful, confident and a hell of a model, so everyone should be kind. And that is what I told myself as I whipped up a big fat batch of Pear and Jeanger Turnover.

Spicy and sweet, hot and rich, this turnovers are velvety smooth in the middle with a kick of spice. Enclose it in pastry and everyone is a fan. 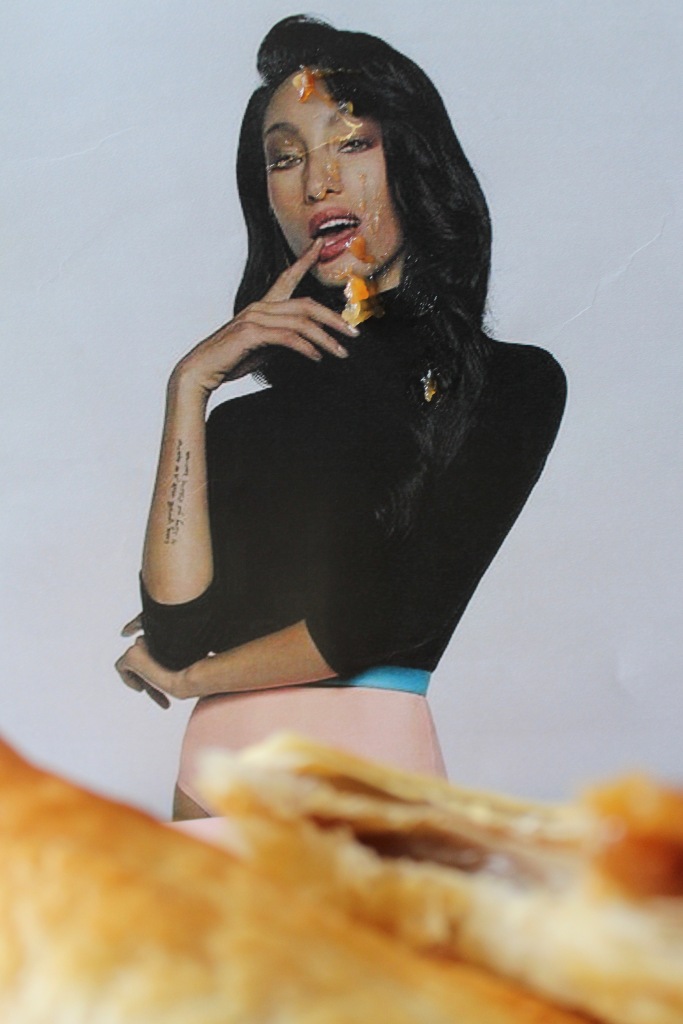 Method
Melt the butter in a saucepan over medium heat. Once frothy, add the pears and simmer for about five minutes. Add the ginger, cinnamon, vanilla and muscovado, and cook for about ten minutes, or until caramelly and sticky. Remove from heat and allow to cool.

When the filling is cool enough to work with, place the cut puff pastry on a workspace and spoon 2-3 tbsp of filling into a corner. Fold over on the diagonal to form a triangle and crimp the edges with a fork to seal. Place on a lined baking sheet and continue until the pastry or filling is all gone.

Brush each turnover with the egg and transfer to the oven to bake for fifteen-twenty minutes, or until golden and cooked through.

Allow to cool, if you can, before devouring.

Previously on America’s Next Top Model, the final six we tasked with running around L.A. to book fashion shows at a series of go-sees where Rio and Kyka dominated, despite hating each other. On the rise of villain Rio, she and Jeana continued to grow more and more dislikable though tragically landed amongst the top while momma Erin was finally cut from the competition.

We opened up back at panel where Tyra was already tasking the girls with the next challenge, where they’d be required to show off their personality. We were then treated to a delightful montage of Rio’s horrific one, which I’m hoping leads to a pride before the fall kinda gig. The girls were summoned back to panel where they were greeted by Tyra’s avatar … before they were tasked with designing their own avatar for the ANTM mobile game. Soooooo, they’re being challenged to make one of their potential prizes. You truly can’t make this shit up.

Though the fact the girls win a session with Law in a celebrity showroom makes it worth it, I guess.

When it came to presenting their avatars, Rio was moderately likeable given she reminded me that she had a brain tumour. Kyla was adorable, but Law felt she was flat, Shanice brought full Shanasty, Khrystyana was perfection and Jeana was completely devoid of personality, which is literally the challenge of the episode. Once again Khrystyana took out the challenge, pissing off second place Rio and distant fifth Jeana. On the way home Khrystyana was celebrating with Kyla which led to Jeana flipping out on her and being low-key racist. Actually, was it even low-key?

Back at the house Rio was feeling invincible after taking out another best photo, taking issue with Shanice saying everyone was struggling with the competition. Later that night Khrystyana was awoken by the tears of Jeana and because she is a saint, she pulled aside the person who was yelling at her hours before and tried to comfort her. Amongst it Jeana bitched about the ANTM game before saying she will win the competition … which isn’t going to happen after shading one of the prizes.

The next day the girls arrived at a mansion where they would need their personality to shine in a Maejor – capital M, addition of an e – music video, filmed by Director X. Much to Kyla’s delight. Once again Rio let us know that she is hella confident given she is such a winner, while Jeana was showing a tonne of humility.

On set the girls were required to kick things off showing their best boring, which Jeana surprisingly didn’t excel at despite Law’s character assessment. Also, as predicted FYI, Rio completely bombed. Tyra arrived to film a cameo as the girls were required to bring out personality, which Rio and Jeana could not bring. All of the girls then had some solo time bringing the fantasy where once again Kyla – who was thirs-ty – Shanice and Khrystyana slayed, and Jeana and Rio bombed. Which is making me feel bad now, because they had been doing so well.

Though Jeana diving into Khrystyana and Rio’s shots after smirking her way through Khrystyana’s heel breaking made it far more difficult for me to sympathise with her.

The girls arrived at panel where the music video showed that the arrogant twins were far and away the worst performers, which … hopefully is a humbling experience, right? Kyla almost flipped out when it came time to be critiqued by her zaddy Director X, leading to a hug from the man himself after which I don’t think she cared what anyone said. FYI – the judges loved her and thought she had finally shed her skin. Khrystyana received glowing praise and brought her usually delightful personality to panel. On the flipside, Jeana bombed, Rio was read for filth and Shanice brought model to the face and hero cosplay to the body. We also learnt that Jeana was requested in the pillow fight scene too which definitely changed the narrative, so sorry Jeana. Once again Khrystyana took out best photo – her fourth Rio, FYI – while surprising no one, Rio and Jeana landed in the bottom two with Jeana kicked out of the competition (despite Rio performing worst in the video TBH).

Now I know I’ve been extremely hard on Jeana and Rio, but to quote the great Tyra meltdown – I was rooting for her, we were all rooting for her … when my momma yells at me like this its because she cares about me. I truly was rooting for Jeana, she was completely slaying the competition but over the course of the past couple of episodes, she got into her head and the arrogance overshadowed her insane beauty.

I screamed that in her face and after we both calmed down, we held each other and cried about how getting in her head got in the way and that hopefully this will be a learning experience if she ever got a chance to return – come on through All Stars 2! After that, our friendship was renewed – I worked at an alopecia awareness charity after being moved by the plight of Caitlin Cooper’s pony in The O.C. – and we could enjoy our Lamb and Apricot Tajeana Turner in peace while toasting to her future success.

A little bit sweet with an aggressive kick, this was the perfect dish to work through our issues whilst also allowing me to get a few jabs in. That being said, like Jeana, this is beautiful and it is hard to stay mad at it – and her – for too long.

Stir the tomatoes, chickpeas, stock and sweet potato into the pan and bring to the boil. Once rollicking, reduce heat to low, cover and simmer for half an hour to an hour, or until the sauce has reduced and the meat is tender and cooked through. Add the apricots, stir through and cook for a further five minutes.

Serve on a bed of couscous, sprinkled with coriander and devour, gleefully.