Previously on Survivor, the end of the Chris v. Dom feud led to a unified Naviti splitting the vote between Michael and Libby to continue the desolation of Malolo. While Ozzy’s glowed up stick – not this NSFW one – saved Michael, poor Libby found herself heading out of the game and straight to the jury.

Given it was a rather straightforward tribal, we joined Lavita the next day with Dom telling Laurel about his dream from the previous night which featured a cameo from Martin Sheen – or maybe Michael TBH, I can’t remember – and a killer bacon and egg roll. While I would have loved to hear more about the dream and the BER, Des joined us to share that while the food situation is dire her experience being homeless set her up to deal with it. I’m a terrible person for caring more about the dream story, aren’t I? Des then joined Laurel, Donathand and Jenna to tell them that she was looking to make a move, put an end to Kellyn’s Naviti strong and take her out, followed by Wendell and Dom. While that is the best idea, she is telling Wendell and Dom’s closest ally and therefore it seems doomed to backfire.

Before we can hear more about her BIG MOOOOOVEEEESSSS, Probst returned to lord over yet another team reward challenge where they were required to have two people rescue the remaining members of their team, collect puzzle pieces and then, obvi, assemble said puzzle. Sebastian and Michael got the orange team out to an early lead and I noticed that Michael is once again wearing shorts instead of his holey jocks, making me yearn to see how large the holes are now. Anyway, Wendell is still rocking the jocks and I’m moister than an oyster. So anyway, the orange team of Sebastian, Michael, Chelsea, Kellyn and Jenna dominated while Donathan – who wasn’t selected – looked on and purple languished at sea. While purple did their best to close the gap, boy wonder Michael lead his team through the puzzle and to victory of a chopper ride and picnic. Once again, the victors couldn’t come to consensus about who to send to Ghost Island leaving the Survivor Gods to send Angela for a trip while they headed to the chopper.

Michael and Co arrived at the reward site, struggling to comprehend how epic their victory was and gave Michael the chance to find cracks in the majority. Which I hope for my lust’s sake, they listen to. While Chelsea and Sebastian were making him feel better, Kellyn was confident it was all a rouse and they were still – wait for it – Naviti strong. Meanwhile over at Ghost Island Angela was given the opportunity to play for an advantage and given she has the majority without her vote, she went for it. Sadly for her, she picked badly and finished with no vote at the next tribal which could screw her if a flip does happen.

Back at camp Laurel and Donathan decided they were better off sticking with Dom and Wendell, so went to them to share that the people on the bottom of the Naviti alliance were planning to flip on them ASAP. While Dom admitted it was in their best interests, he made quick work of putting out the fire by telling Kellyn that her closest allies wanted to kick her out at the next tribal council. She was mildly concerned that it was true, she felt confident enough to trust her gut that they would never turn on her.

Laurel and Donathan continued their dominance, encouraging Michael to go searching for yet another idol to try and ensure his safety. While Michael was a man on a mission, Donathan wanted to join him and then snatched it out from beneath him. Said idol was Scot’s Kaoh Rong idol which was cursed when Tai refused to join it with his idol to save him. As such, said idol was powerless unless Donathan could get the idol under the middle of the shelter to restore its power. He then returned to the shelter and with Laurel, Michael and Jenna’s help was able to distract the tribe long enough to make the grab and reverse the, yep, curse.

Probst returned for the next immunity challenge where the tribe was required to balance a ball on a disc suspended like two ropes, so you know Probst is going to have fun with ball puns. Wendell dropped almost instantly, I assume because his balls were covered by shorts. He was quickly followed by Jenna, Laurel, Des and Angela, before Michael proved adept at ball play and could keep it up. Not long after Donathan and Dom dropped out, followed by Michael just before the next section of the challenge. While the final three looked solid, Kellyn dropped soon after getting to the next stage before Sebastian couldn’t keep up his luck, dropping the ball and handing Chelsea victory. I think, since she is barely on screen.

After briefly congratulating Chelsea, Des celebrated the fact Kellyn didn’t win and got to work rallying the troops to take her out. Sadly Kellyn confronted Des and Chelsea about their potential flip assuming it was just a lie Laurel told Dom rather than the truth. Des then approached Laurel and the remaining Malolo members about her alleged lies to Dom to cover her tracks. Sadly for her, Donathan was also present for the conversation and quickly pointed out that it happened. Laurel and Dom reconvened, vowing the strong need to stick together and take Des out on the defensive. Dom then pulled in Michael, while Laurel and Jenna went to convince Kellyn that the conversation actually happened. Which she kinda did, despite still feeling it was too early to destroy the OG Naviti tribe. She then confronted Dom and accused him of starting an all male alliance with Michael which made me extremely confused as they headed off to tribal council.

At tribal council Des was quick to throw Des under the bus for causing all of the drama at camp. While she tried to deflect and make it seem like Laurel was making things up, Laurel, Donathan and Jenna joined Michael in completely dominating tribals and read Des for filth and called her out for all of her lies. While Chelsea was concerned about being thrown under the bus by Des’ plan, she had immunity and was kinda blase about the sitch. Michael was still feeling nervous about the upcoming vote since he is still on the bottom – I wish – while Donathan seethed about the fact no one was trusting them when it came to Des. Kellyn tried to channel her inner Jessica Jones and get to the truth while Des just seemed over sorting it out and just wanted to vote. Tragically for her that was a mistake as said vote resulted in her becoming the third member of the jury.

Poor Des was hella exasperated by the time she arrived at Ponderosa, though given the fact she was the one that spent the last 24 hours lying to save herself I was kinda confused. I mean, sure, be disappointed … but exasperation at people not buying your lie. I call sour grapes. Obvi I didn’t tell her this to her face, instead opting to hold her tight, let her cry through the pain and then cheer her back up with a Loadesiree Potatafuye. 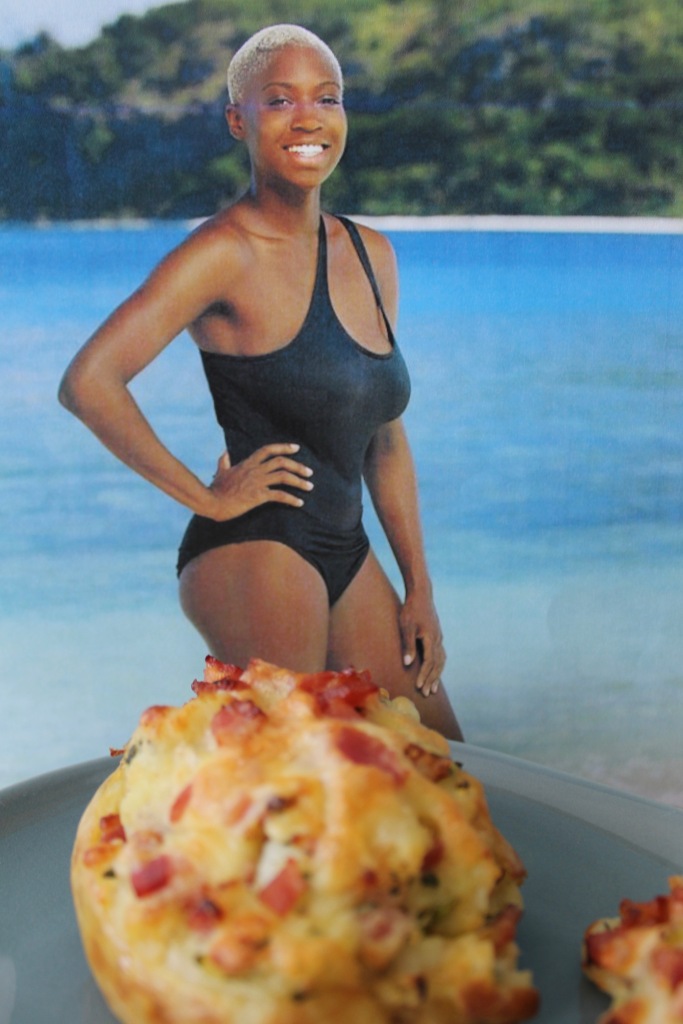 While my primary school tuckshop referred to them as stuffed potatoes, there is nothing better than a loaded potato. I mean, how can you go wrong with a bed of gloriously baked potato stuffed full o’ – wait for it, waaaaaaiiiiit for iiiiiiit – all the fixin’s?

Prick potatoes with mental skewer, wrap tightly in foil and place on a lined baking tray. Transfer to the oven and bake for an hour or so, or until soft.

Unwrap the potatoes and slice off the tops. Scoop out the flesh and mash in a large bowl with the sour cream, butter, paprika, chives and a good whack of salt and pepper. Stir through half the shallots, bacon and cheese and spoon the mixture back into the potatoes. Sprinkle with the remaining shallots, bacon and cheese, and transfer to the oven to bake for a further ten minutes, or until the cheese is golden and crisp.