After spending the last couple of days in ‘87 catching up with Bea and Estelle, I wasn’t sure if I should hang around for my date with Rue or go visit her in ‘05 when she was appearing in Wicked. Despite the fact it would likely have lead me to landing a part in the hit musical – and probs my first Tony – I decided to stick with the past.

Mainly to avoid a feud due to me exiting the time period without a word. Though it’s not like it would have lasted long, given how close we were.

I first met Rue on the set of Maude in the ‘70s. I, of course, was there as part of Bea’s entourage but I was fast taken by the delightful Eddi-Rue. We were both thrice divorced by the time we met and it was just such a comfort to have someone to talk to that had been through the same thing.

Rue always felt like the glue that held the girls together, given her warm, loving nature and I am so thankful to be able to experience it firsthand once more.

I ran into her arms and held back my tears for her unexpected death in 2010.

“Now my sweet boy. Bea and Stell told me I’m in for a real treat for dinner … like how the men feel when going on a date with that Blanche!” 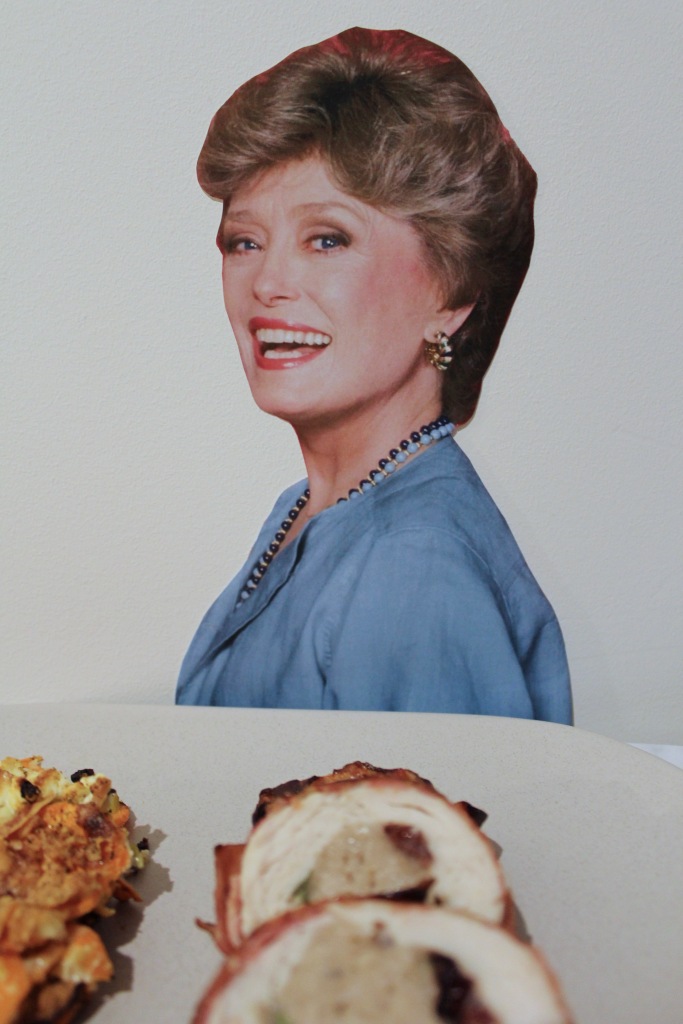 Given I was cooking in someone else’s kitchen … in the ‘80s, I couldn’t go around whipping up a big roast. That of course doesn’t take away from the fact this is a show stopper. The crispy pancetta crust keeps the turkey nice and moist. Particularly when you stuff it full of more meat and a good whack of herbs.

Combine the sage, sausage, carrot, garlic, parmesan, craisins and spinach in a bowl with a good whack of pepper.

Arrange the pancetta on a sheet of baking paper, slightly overlapping. Line the flattened breasts along one of the long edges, pressing closely or overlapping to form a clean piece of meat. Form the stuffing into a long sausage and place it along the centre of the meat. Using the baking paper as a guide, tightly roll the turkey over to form a long roll, with the pancetta sealing the turkey meat. Tie with a couple of pieces of kitchen twine to secure, transfer to a lined baking sheet and bake for 45 minutes, or until crisp on the outside and beautifully cooked on the inside.

Allow to stand for five minutes or so before carving, serving and, most importantly, devouring.