Oh my lordy my dear friend Domhnall Gleeson is just such a damn sweetheart! Despite not really prepared to go from London winter to Brisbane summer, he still ran into my arms and held me for an eternity as we had the most moist, non-sexual hug of all time.

Though obviously I still found it hot.

It is ironic, since I met Dom almost a decade ago on the set of Never Let Me Go. I was visiting Kiz at the time, but given my passion for redheads he caught my eye and while a torrid love affair wasn’t in our future, a beautiful friendship was. Particularly after we spent more time on the set of the final Harry Potter films.

I haven’t seen much of Dom in the last few years due to his hectic filming schedules and his star continuing to rise, so it was such a treat to be able to take some time out from Star Wars – thanks to some casual threats I made to JJ to give him a week off – and reconnect.

While he felt my threats would likely block me from entering the UK slash not make JJ open to casting me as Carrie’s long lost good son slash Adam Driver’s twin, who will defeat Adam Driver. Unless he is the good guy, in which case I will be the villain – All I know is Adam plays her son, ok? – he is open to talking to him to see if he can rewrite the movie and include me.

What a bloody champ? Maybe an Oscar is on the cards for me next year.

Given how much havoc travel can play on the gastrointestinal system, I knew a lighter meal would be the best idea for someone making such a long trip in a short time frame. Which is convenient, because he absolutely adores Papadomhnall Gleeson. 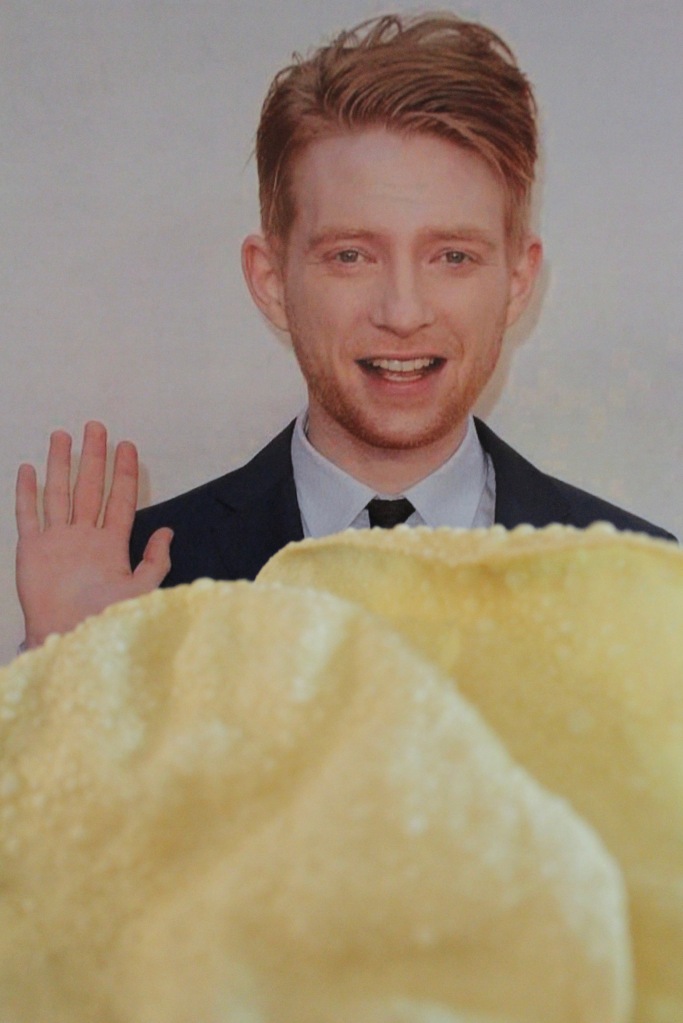 Obviously this is not my recipe as I like most people am lazy and prefer to buy the dried ones, though I am thrilled to say you should all stop as these are super easy and so much better. Fresh and crunchy, they’re the perfect receptacle for smashing a curry. Or just gorging on as a snack. 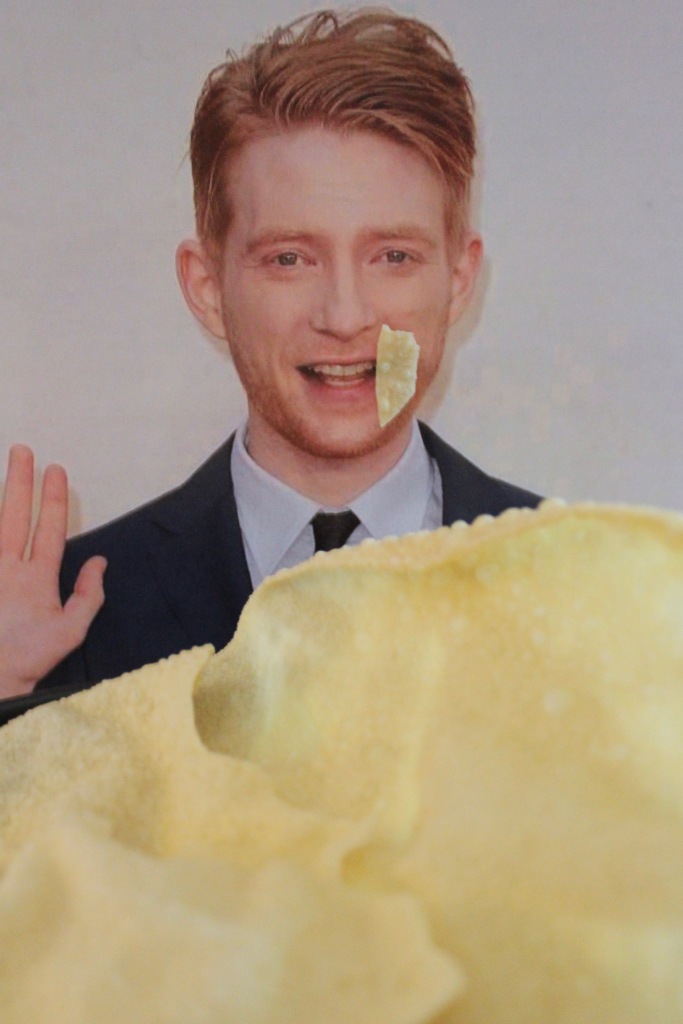 Combine the dry ingredients in a bowl, before creating a well in the centre to slowly add the water. Knead until a smooth ball has formed. You want it to hold together without being sticky, so adjust the flour and water as desired.

Divide the dough into 12 balls and roll out between two baking sheets until very thin, like the packet ones. Place on a lined baking sheet and cook until dried out.

When you’re ready to eat, heat a generous lug of oil – about 1-2cm deep, so more than a lug I guess – in a pot and fry until crispy and puffed.

Serve with your favourite curry and devour.

While he may not be one of the big ticket Weasley’s in the Harry Potter universe, Domhnall Gleeson is the one that truly has my heart and as such I was thrilled to discover he was free to catch-up this week.

Given he is super busy filming the upcoming Star Wars, I was surprised to receive his call saying he was free and keen to drop by and hang.

Obvi I said yes – I mean, it was kiss a ginger day last week and he is a babe – and obvi I’m going to find a way to work my way into the movie to honour my dear Caz.

What do I make to help with my persuasiveness?

Once again we’ve come to the end of another glorious Oscar Gold celebration in honour of tomorrow’s big day. Quickly on that note – I know I normally give you live behind the scenes coverage as I walk the red carpet, try and bribe the PWC auditors/steal their briefcase, reconnect with my many ex-lovers and script doctor the hosts efforts … but Jimmy banned me from doing it this year.

Something about my inflamatory way of behaving putting me perilously close from being banned from the Academy for life.

While I am pissed, the show must go on as Hollywood needs me. Plus, you guys need to know tips for your last minute bets.

Now for the moment we’ve been waiting decades for … I was finally able to welcome my dear friend Leo DiCaps to the Oscar Gold party. While it is tragic we will no longer have sad Leo memes at every couple of Oscars, I was ecstatic to be there – live tweeting, thank you Jim – to witness Leo finally snatch the statue after years in the Oscars’ bridesmaid wilderness.

I first met Leo on the set of his first film Critters 3 where we became fast friends of the mutual disappointment we felt for our co-stars. It was on that set that I decided to take him under my wing and help him reach the heights of fame.

I think it is no coincidence that he received his first unsuccessful Oscar nom less than two years later. Leo – and the wider world – you’re welcome.

Being a newly minted Best Actor winner, Leo and I giddily got to work discussing the odds for both the male categories. He agreed that Casey Affleck’s melancholic beauty in Manchester by the Sea deserves the glory … but it extremely concerned that Julia Robert’s will be loving her life again with Denzel pipping him at the post for a loud performance.

To be honest, if anyone is pipping Casey, it should be Viggo … but anyway.

Over in Best Supporting it is essentially a one horse race with there being no way in hell anyone is beating Mahershala Ali. Though I said that about Trump’s Presidency, so who knows?

Given that we both have suits to fit into tomorrow – as Leo asked me to attend as his date – I quickly whipped up a fresh Leonardo DiCapsicum & Feta Dip to mark the first anniversary of him breaking his Oscars drought. 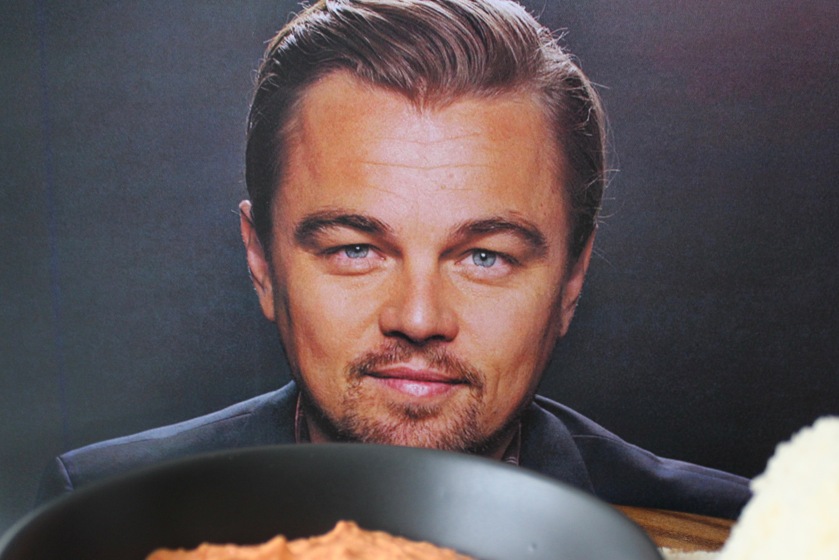 Creamy, tart and completely delicious. This dip is super easy to make and even easier to eat. 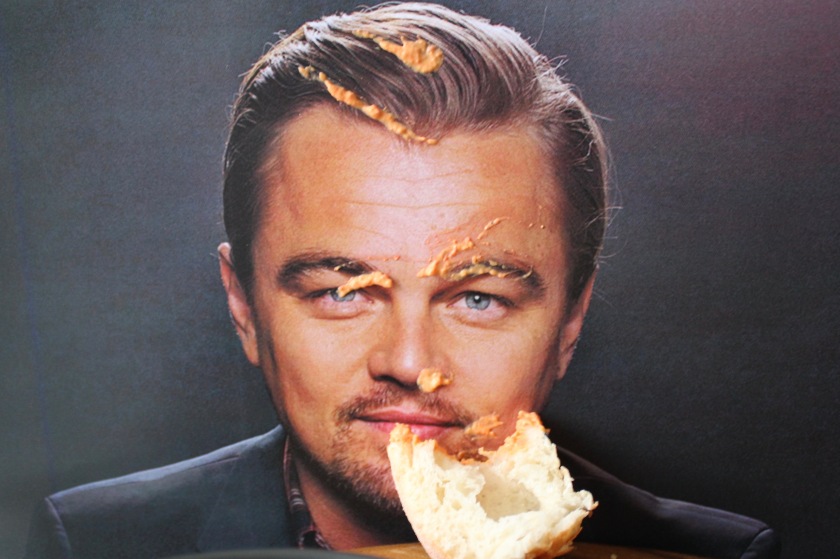 Method
Combine all the ingredients in a food processor.