Don’t you just love a good comeback story? And no. I’m not referring to the sublime TV show The Comeback based on an unnamed friend of mine – Mickey was modelled after me – I’m talking about the upcoming resurgence of my dear friend la Lohan.

As you could probs surmise, I first met Linds on the set of The Parent Trap. You see, I had convinced my dear friend Nance Myers to do an updated version to one-up the Olsen Twins and It Takes Two – it was during a brief feud – but was bested in the audition process by Lohan. Thus telling her it was the inferior movie, despite it being a modern classic and her performance – no doubt – inspiring Tatiana Maslany’s brave performances in Orphan Black.

Anyway, Nance offered to become my kitchen designer to soften the blow and that defused the on-set tension enough for Linds and I to realise that we’re essentially the same person, and as such would make the best of friends. Ever.

As an apology for being quite vicious early on in filming, I got Linds cast opposite my girl Tyra in Life-Size … then Freaky Friday with Jamie, followed by Mean Girls with Ames and Teens, after which, she became the star she was destined to be.

It was such a delight to finally have Linds over and to celebrate her reaching the halfway point of our career rehab plan. While I don’t want to spoil much of what is ahead for Queen LiLo, I can say that my Lindsay Lohand Fries aren’t the only bright point in her future. 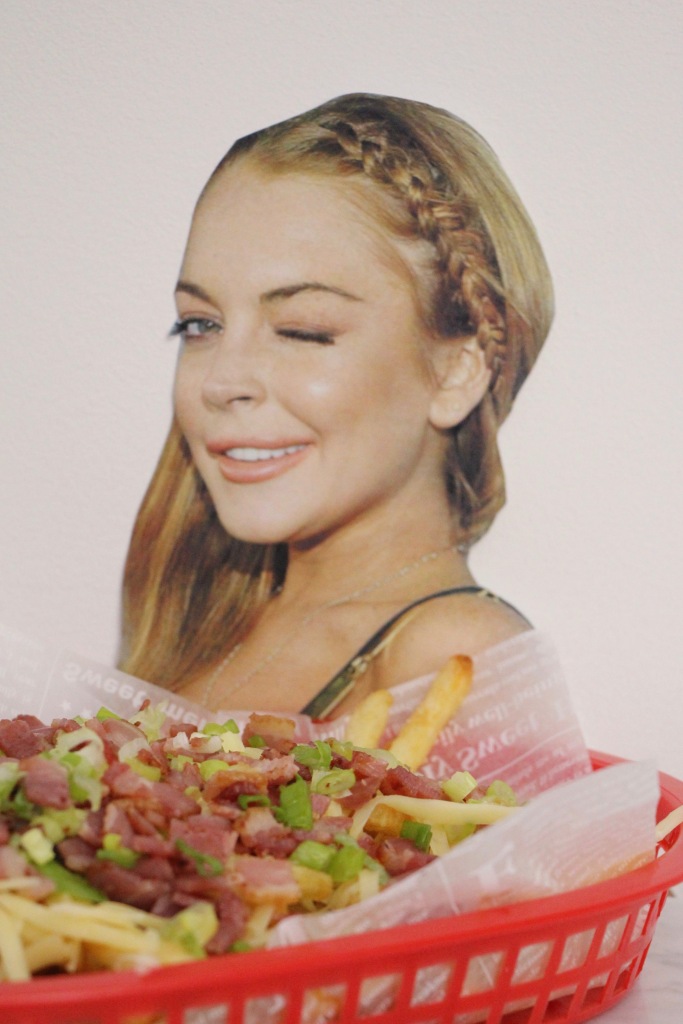 Are loaded fries hella basic? Yes. But let’s be real, I am a basic bitch, Linds loves me for it, and the combination of bacon, shallots, cheese and piping hot fries are something that never fails. Ever. 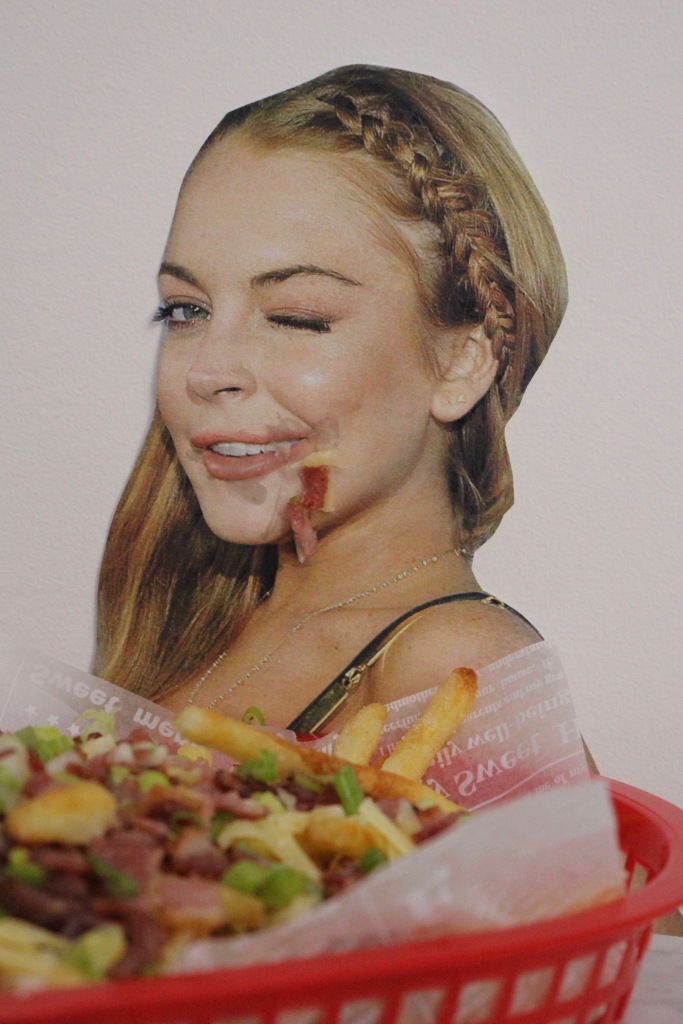 Toss the freshly cut fries through olive oil and place on a lined baking sheet. Place in the oven and bake for twenty minutes, turning halfway through cooking.

While the fries are baking, bring a skillet to heat. Once piping, reduce heat to medium and add the bacon. Cook, stirring, until crispy and glorious.

When the fries are done, lightly salt them and transfer to a bowl before topping with the cooked bacon, shallots and a generous helping of cheese. Sour cream and sriracha are optional extras, but come highly recommended when you’re ready to devour. Is it part of my sixty-step approach to bringing her renewed fame and a reinvigorated career? Sure.

Is it odd she still trusts me after The Canyons? Definitely.

In retrospect, is it still odd that we were able to bury the hatchet early in our friendship when I told her The Parent Trap remake was a poor man’s version of It Takes Two? Chillingly so.

In any event, what do I make for the iconic Lilo?

After scaring us half to death with the prospect of a private, confidential catch-up, Jamie was on her best behaviour when she dropped by and she was proud of it.

We have been friends with Jamie since our childhood when I appeared as Kyle Richard’s stunt double in Halloween and Annelie was directing films under the pseudonym of John Carpenter.

While we  have occasionally gone too far, what with the anthrax incident and the time we had her quarantined for Ebola, we’ve only had one serious fight after I was arrested for stalking her godson. I mean, the whole ugliness could have been avoided had she just consented to introducing us/allowing us to trap him in our home.

Despite this setback, we have always enjoyed a close working relationship with Jamie; getting her jobs on Roadgames, My Girl and the critically acclaimed Beverly Hills Chihuahua (although sadly, we couldn’t negotiate for her to keep her role in the sequels) and she keeps us with a bountiful supply of yoghurt and patented diapers.

James was in fine spirits, and surprisingly a shirt, when she dropped over, gushing over her upcoming role in Scream Queens (we know who the killer is, but obvs can’t say anything … other than the fact Billie Lourd is a saint, but look at her mother/grandmother) and how Jake was willing to meet up for mediation.

A return to fame for us and look who comes crawling back!

Wanting to focus on the boozing while she was here, we opted for a generous batch of our famous Chicken & Jamie LeeKurtis Pies. 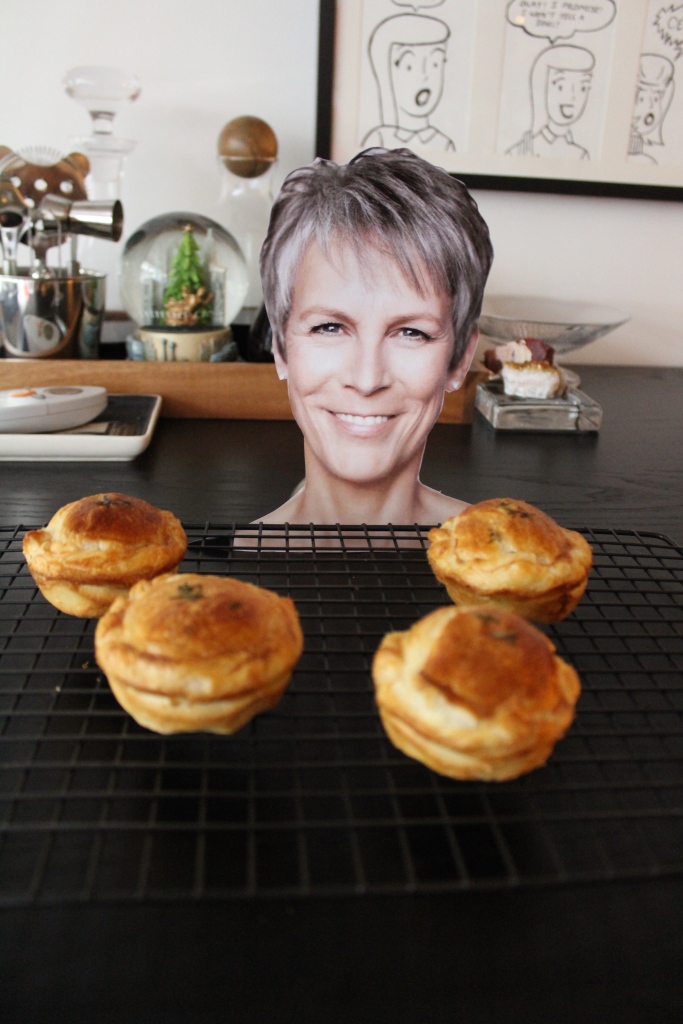 Decidedly low on yoghurt content, these pies still keep you feeling regular. Obviously “regular” for you needs to mean happy and content with a stomach filled with love.

Enjoy! Also, fun fact, don’t use the line “a stomach filled with love” if you’re on trial for stalking. 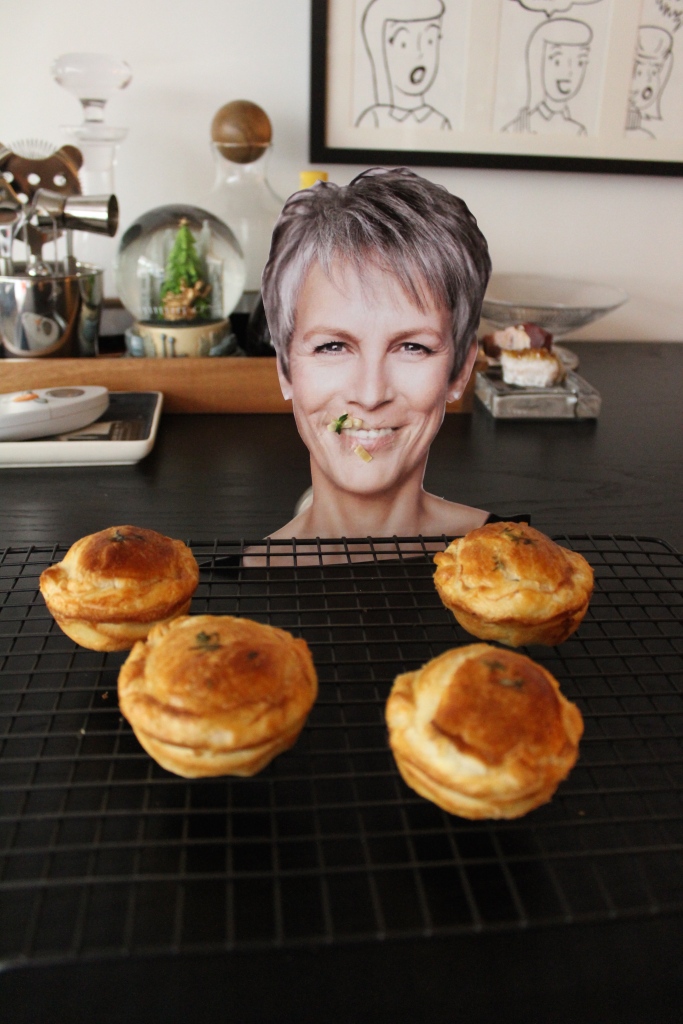 Method
Melt butter in the pan and brown diced chicken for 1-2 minutes. Add the leek and celery and cook, stirring, until soft.

Stir in thyme and flour until bubbling. Add white wine, stirring to combine until slightly thickened before adding the stock, cream and mustard, until mixture boils and thickens. Season to taste with salt and black pepper and remove from heat, cool slightly.

Bake on the lowest shelf for 15 minutes or until browned.