I thought I was feeling strong, but the close it gets to finale day – three days, ya’ll – it is getting harder and harder to keep an upbeat tone while I prepared to say farewell to the majestic Broad City. (Just ask Abbi and Art)! Which makes it super convenient that Hannibal Buress dropped by, as the man is hilarious.

I mean, he hired a lookalike to attend a film premiere in his place because he couldn’t be bothered going himself. That is a baller, iconic move and I love it.

I’ve known Hannibal for years and years, after meeting in the writers room of another tragically finished show 30 Rock. While his tenure there wasn’t long, his exit coincided with one of my bannings from NBC and he kindly took me under his wing and let me be his hype guy.

Tragically I failed at that job too – apparently hyping oneself isn’t what the job entails – so I was allowed to just hang in his entourage and live my best life.

Maybe I inspire him to send a stand-in to the premiere?

It was so much fun to have a little bit of time with Hannibal and to honour Lincoln and his passion for better dental care. Fun fact: it was actually my suggestion he be a dentist, as a tribute to my grandfather.

Something that isn’t so great on teeth, however, are my copycat Hannimal Style Furess. But we won’t tell Lincoln, ok?

You know I have a passion for In’N’Out and given their Australian pop-ups never seem to come Brisbane, I have to DIY. Which TBH is both a blessing and a curse because now I can inhale animal style fries as often as I like, in bulk like quantities without judgement. And now you can too.

Method
Cook the fries as per Jud’s recipe.

Meanwhile heat a lug of oil in a saucepan over medium heat and sweat the onions for five minutes before reducing to low and caramelising for half an hour or so, adding a small amount of water if needed to deglaze the pan.

Finally mix the mayo, ketchup, pickle and champagne vinegar in a jug and whisk to combine.

To assemble, place the fries in a bowl, sprinkle with caramelised onion, followed by slices of American cheese and finally topping with copious amounts of sauce.

Devour immediately, with a bestie … or without.

Given the fact we both have dark, curly hair and well, that is it (but hey, it was enough to get me the job as his body-double), my torrid love affair with Andy Samberg is the closest I’ve ever come to twincest but that isn’t the greatest thing our love bore – Dick in a Box.

Originally co-written as a celebratory post-coital jam Dick in a Box, in the previous timeline, would have gone on to be a gay anthem that we likely would have submitted to Eurovision to be sung by Engelbert Humperdinck in the UK. Instead, I had to give up our love affair when travelling back in time but knew that the world needed that song so dropped hints for Andy to include a different version during his time on SNL.

While Andy sometimes doesn’t believe our past affair in the alternate timeline, we have always been close friends and collaborators with him insisting my personality inspired the best aspects of both Jake Peralta and Gina Linetti on his current hit show, Brooklyn Nine Nine.

Being close friends with his wife in this timeline (I taught her harp and encouraged Melbourne to use her song for their infamous ad), I always try and catch up with the first couple I ever married when I get the chance. Don’t tell them I’m not actually allowed to officiate marriages, I wanted to keep my options with Andy open … 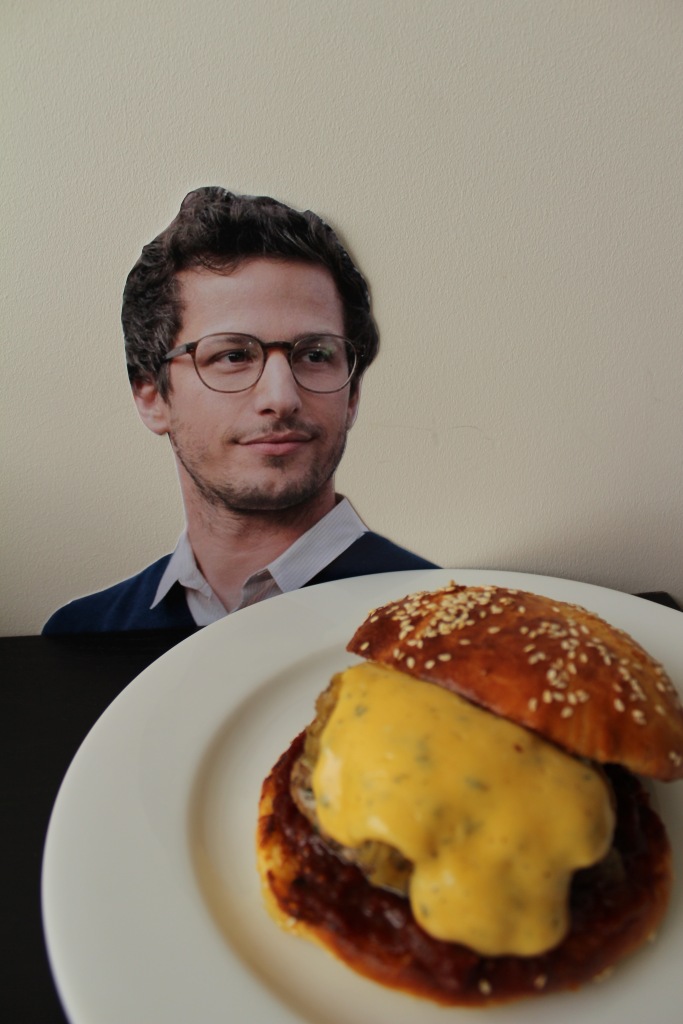 Sweet, soft round buns with a thick piece of hot, spicy meat covered in a nice creamy load of bernaise, you’d be forgiven for thinking we were in the OG timeline but with onions.

I would explain to you the laws of our time-travel but I need to go cool myself down – enjoy!

Method
Place parsley, capers, peppers and garlic in a food processor and blitz to create a rough paste. Add to a large bowl with the beef mince and a good whack of salt and pepper. Mix together and form into 6-8 evenly sized patties, place on a plate lined with cling, cover and refrigerate for an hour or so.

While they are sitting in their juices and becoming delightful, get to work on the onions. Place a medium saucepan over low heat and melt butter until it starts to foam before adding the onions. Cook slowly until soft, caramelised and sweet … or about half an hour. Turn off, cover and leave to rest.

Once the onions are sweet and glorious, heat a large griddle over high heat. When it is nice and hot, toast the halved buns and remove to serving plates. Reduce the temperature to low and brush with oil before added all of the patties. Cook for a few minutes either side until they’re at the desired ‘doneness’, making sure you only flip them once.

Now to get building, smear some dijon on the top of the bun and spread a generous dollop of relish on the bottom. Top with some caramelised onion, then the patty and top with some fresh Bernie.

Lucky I’d conveniently caught up with the whole gang recently!

What the what are we doing posting our week’s schedule a day late, you ask?!

For those who may have been living under a rock, yesterday was the most wonderful day of the year, Oscar Day, and as such, I was muy muy busy, co-hosting the red carpet for E, Bravo, ABC, Retirement Living and four other networks while attending as a major Hollywood A-lister’s date, seat-filling AND live blogging the whole thing for you, and was unable to post this week’s tease as planned.

Never fear! I am back to work with a killer hangover to let you know that I am catching up with my dear friend Andy Samberg before I jet back to Australia.

I first connected with Andy in the early teenies when I was doing a lot of work as a body double, on account of my low-esteem and desire to be adored in place of famous people. During this time an up and comer called Andy Samberg crossed the ditch to headline a series called Cuckoo and a beautiful friendship began.

Through the use of time-travel, I went back to 2005 and gave him pointers to avoid pissing off Lorne Michaels at the SNL auditions and thus, this timeline was born and I saved him from a failed career and savage cocaine addiction. See, I’m not that horrible! I do make positive contributions to society!

What says how do we fix the egregious striking of you name from last year’s Best Original Song nominee, Everything is Awesome?