There was only one person I could spend actual Cinco de Cuatro with and that is my dear friend Jase Bates.

Well, actually, I’m still a bit iffy on the logistics of which day Cinco de Cuatro falls on but I’m rolling with the day before Cinco de Mayo thing. Just roll with it, ok?

Jase is on my my dearest friends – because he is born in ‘69 (lol) and shares my husband’s middle name – so I am super stoked that he is Arrested Development’s lead and earnt him the plum gig of catching up with me on the big day.

I first met J in the mid-80s through his sister Justine – who I shared a torrid affair with on the set of Family Ties – and was immediately taken by his wit, charm and obvious talent that I could use for coattail riding. Fun fact: when my other friend from Family Ties – Mick J. Foxy – was looking for a lead in the Teen Wolf sequel, Teen Wolf Too, I knew he was the only person that could take on the role.

Turns out I was into bears from an early age.

Anyway, given his career resurgence I haven’t been able to spend as much time with Jasey-B lately, so it was so nice to sit back, take a breath and gasbag about everything we’ve missed over the last few years.

Given how busy I have also been with my career resurgence, it was an exhausting chat and we desperately needed something hearty enough to give us the require energy to celebrate Cinco de Cuatro … enter my lengthily titled Jasalbondigas Batemen. 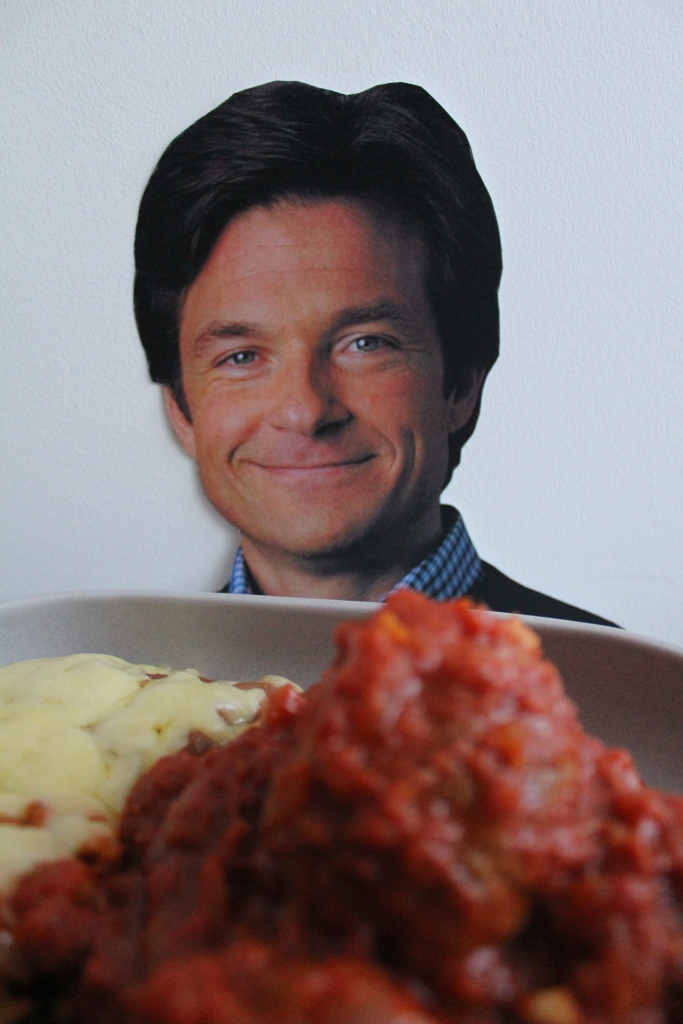 You know how much I love both meat and balls, so it should come as no surprise that I would go straight to a Hispanic meatball in honour of our Mexican celebrations.

Spicy, comforting and oh-so-tasty, these babies go perfectly with some Portia de’arrozi, beans and dickloads of cheese. Hell, eat it after a cheeky Jessica Flaulter and wash it down with a Will Horcharnetta. 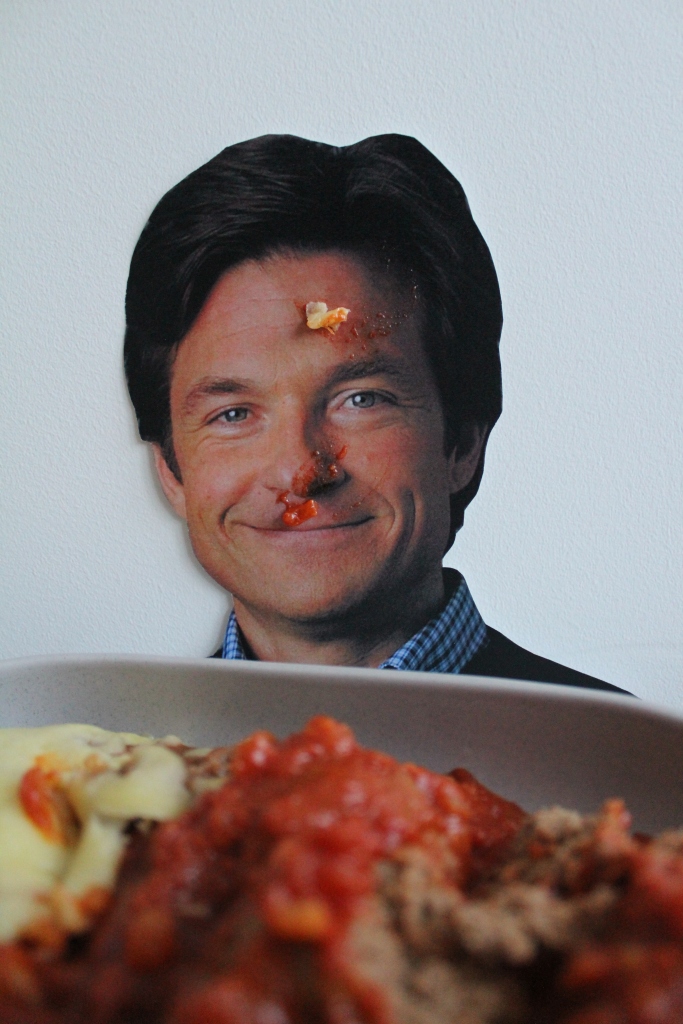 Method
Combine the mince, 2 cloves of garlic, egg, smoked paprika, cumin, chilli powder and oregano in a bowl. Scrunch the mixture with your hands until well combined and form into 12 meatballs. Place on a tray, cover and chill for half an hour.

Heat a lug of oil in a large pan over medium heat. Add the onion and remaining garlic, and cook for five minutes or so, or until translucent and sweet. Add the bay leaf and hot paprika and give a quick stir before adding the tomatoes and a pinch of sugar. When bubbling away, drop in the meatballs and spoon over some liquid. Cover, reduce heat to low and simmer for about twenty minutes or until the balls are cooked through.

Serve immediately with the rice and beans before devouring.

Anyway, I’d barely finished dialling the number before Porsh answered and excitedly screamed into the phone, “yes, yes, yes, yes, YES! I’d love to come visit and be featured on your anthropological record of your celebrity friends … to celebrate Cinco de Cuatro.”

Lucky it wasn’t a surprise, otherwise I’d have to take Jess and Will out of my inner circle!

As you can probably tell, it has been a couple of years since I have seen my dear Porsh and I’m so thankful that we finally got it together to put the time aside. Annelie and I have known Por for years – Annelie having co-starred with her in Ally McBeal as the dancing baby, and I co-starred with her as Elle Macpherson’s body double in the Kate Fischer/Tziporah Malkah headliner, Sirens.

Given that she was just killed off on the hit show I pretend to watch, Scandal, P was hella relaxed, having caught up on her sleep and feeling excited for the next step in her career. After swapping a few stories, catching each other up on our families – Ellen misses me desperately, obvs – we sat down for a bowl of spicy, Cinco de Cuatro appropriate Portia de’arrozi. 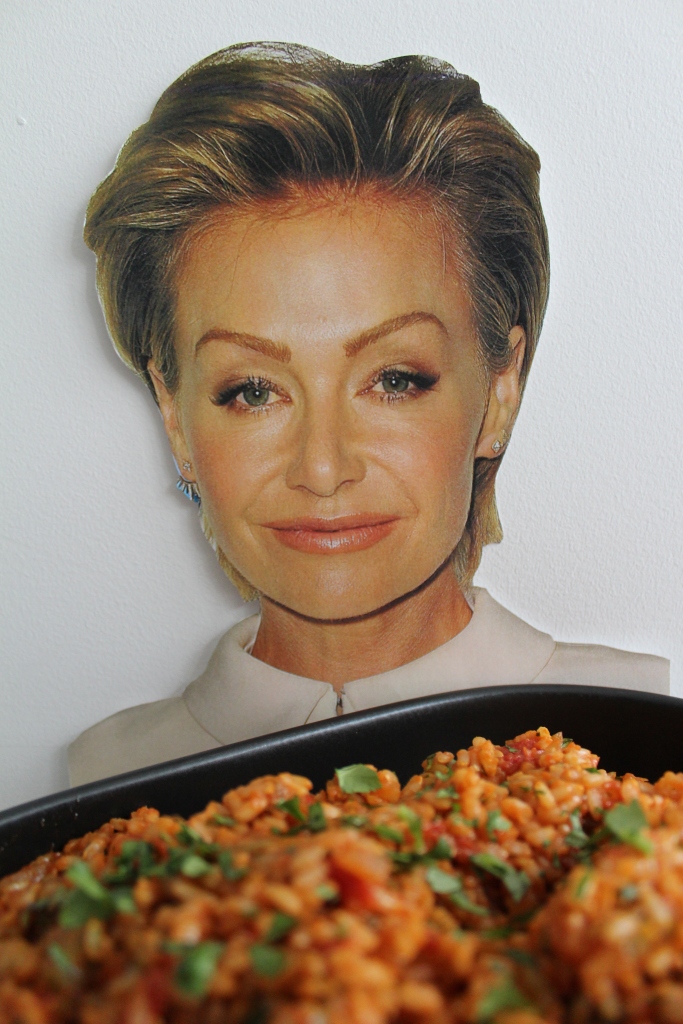 Hot and fresh, this little bowl of goodness is the perfect accompaniment to any meal … or long overdue date with a dear gal-pal. 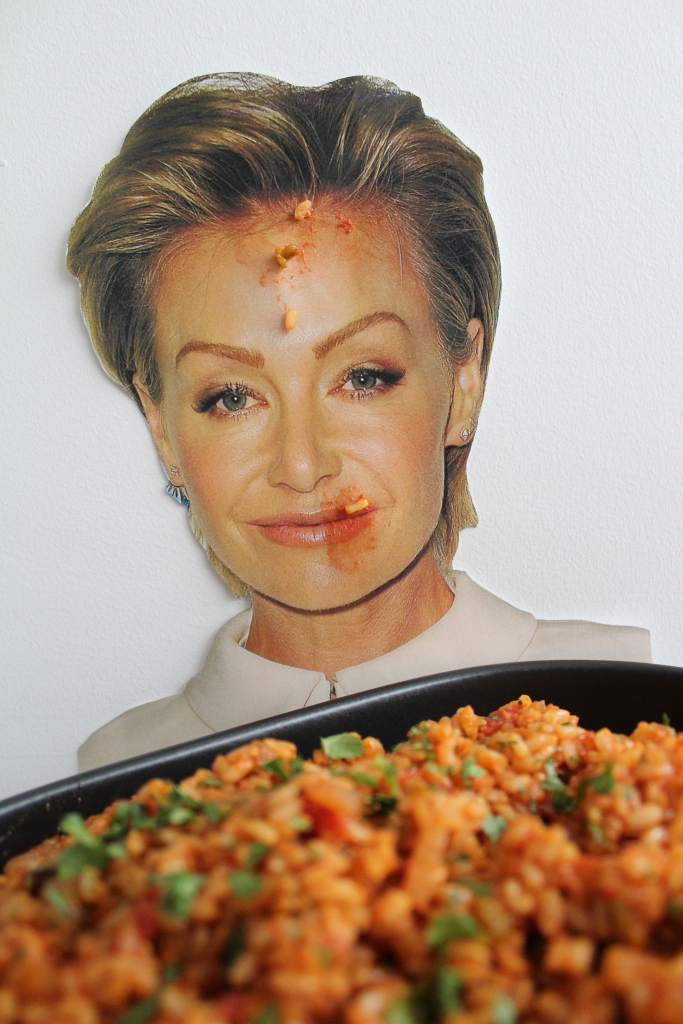 Method
Heat the oil in a large saucepan over medium heat and sweat the onion and garlic until nice and fragrant. Add the jalapenos and  cook for a further five minutes.

Reduce the heat to low, add the rice and cook, stirring, for about 10 minutes. Stir in the stock and tomatoes, crank the heat and bring to the boil.

Again reduce the heat, cover and simmer for about fifteen minutes, or until the liquid has absorbed. Season generously with salt and pepper, stir through the coriander and lime juice … and devour.