It is not often I will cop to being wrong, but I am so glad that I’ve finally been able to swallow my pride and admit that despite not being my genre, Elementary appears to be a decent show and didn’t die within episodes of airing. And I shouldn’t have scoffed at my dear Lucy for taking the role.

Oh and I am sorry for refusing to talk to her until the show is axed and she admits I was right. Because I wasn’t.

Thankfully Lucy has always known that I can be a volatile person – she did meet me when guesting on Bev Hills, after all – so she took my apology at face value and we quickly caught up on everything we’ve been doing the last almost-decade.

While she isn’t as hopeful that I’ll be able to coax our girl Drew, Cameron D and Destiny to reform for a third Charlie’s Angels movie – I did get a third Sister Act to happen though, even if it won’t be a damn sequel – it was nice to spitball ideas and be in each other’s company.

Given outlining the entire plot of a sure-to-be-Oscar-winning film is tiring and time consuming, I knew that we would need a special combination of comfort and heartiness. As such, we gladly tucked in to a good, ol’ fashioned Jucy Lucy Liu to toast our hopeful success.

While there is a battle between where the Juicy – or jucy – Lucy originated, I like to think it was invented by whichever Tom served it up on Vanderpump Rules a few weeks back. Whoever did create this beauty however, I salute you. Meat injected with hot, hot cheese in the middle of a dripping bun? Sign. Me. UP. 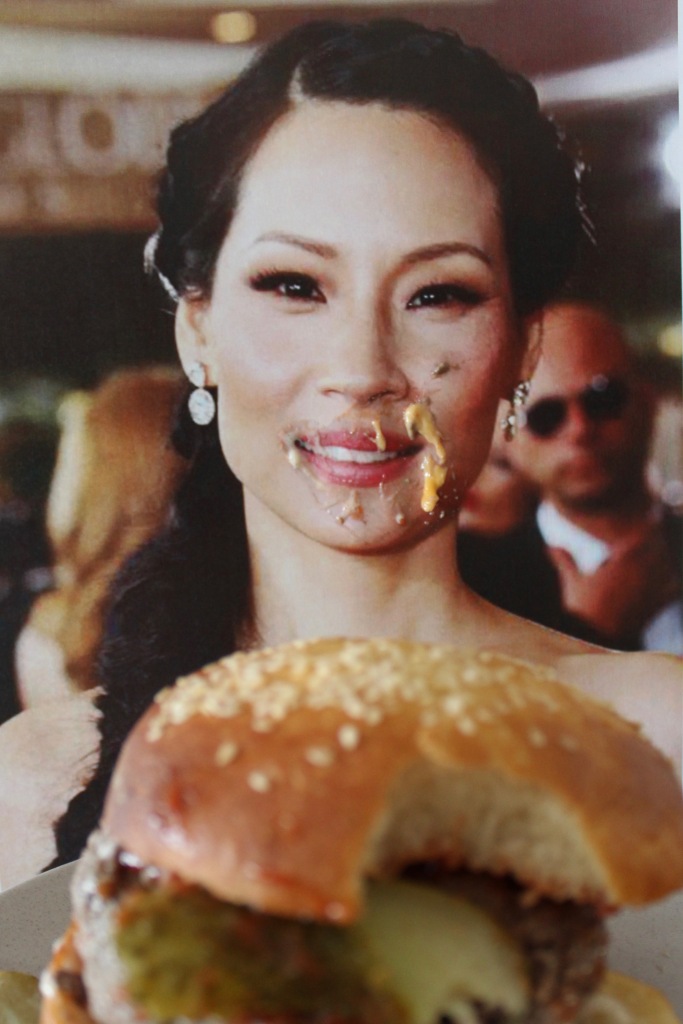 Method
Combine the mince, Worcestershire and garlic in a bowl with a good whack of salt and a great whack of pepper. Once it is well a truly and cohesive mound, divide into four and press into patties.

Take two of said patties and stack a slice’s worth of cheese quarters in the centre and top with the remaining patties. Press the edges to firmly enclose and leave to rest at room temperature for ten minutes.

Heat a good lug of oil in a skillet over medium heat and once scorching, add the patties and cook for five minutes. Flip and cook for a further five, before removing from the heat.

To serve, split and toast the buns. Slather one side with mayo and mustard, and the other with ketchup. Place gherkins on the base,  top with the filled patty and close.

Devour, weary of the molten cheese that could burst out and destroy your face, lips or mouth at any moment.

It is probably hard for you to pinpoint the exact moment that you fell in love with Lucy Liu. I know, I’ve been there, I get it.

Was it her small roles in Beverly Hills, 90210 and Jerry Maguire? Perchance her blistering portrayal of Ling Woo in Ally McBeal? Or her murderous turns as Kitty Baxter in Chicago and O-Ren Ishii in Kill Bill? While all may seem like the right answer, the correct answer is actually seeing her slay Charlie’s Angels.

The more you know.

Anyway, we’re the dearest friends and tragically haven’t seen much of each other this decade since I refused to watch Elementary as I assumed it would be quickly axed. In any event, I swallowed my pride, apologised and she is keen to finally drop by on the record and catch up.

What do I make that says I love you, I need you to continue to succeed … but I still don’t want to watch a police procedural?

As disappointing as it was to have series star – and my now current feud partner – Jason Bateman steal the announcement of Arrested Development season 5, seeing my boy Dave quickly cheered me up and helped me focus on positive things.

(Though obvi, revenge is still a possibility if I’m not cast as a missing Bluth).

I’ve known Dave for years, having met in the writers room of The Ben Stiller Show where I took him under my wing and made him my protege. Then I got fired, which resulted in me becoming ineligible for the writing Emmy that David went on to win with the rest of our co-workers in 1993. Obviously I held a grudge against all of them, but I particularly felt hurt by Dave and spent the next few years trying to bring him down.

Thankfully for my conscience, it didn’t work … and it also made Anna Faris’ job to reunite us on the set of Scary Movie 2, that little bit easier. Fun fact: helping us mend our mostly-one-sided feud inspired her to create her hit podcast Unqualified, but I digress.

With our friendship restored, I put his name forward for the small part of Tobias on that little show Arrested Development and the rest, as they say, is history.

Given that we haven’t seen each other since I caused a scene at the premiere of Alvin and the Chipmunks: Chipwrecked – Jesse McCartney knows what he did – we had plenty to catch-up on.

I knew that we’d stay up all night chatting, so had pre-prepared a batch of David Croissants to help perk us up the next morning.

I have long loved croissants but the idea of making them had always terrified me. That is until I saw the hilarious – despite the insufferable children – It’s Complicated and fell in love with the scene of Mez and Steve making them.

While I in no way made the process look as glamourous as a Nora Ephron movie, these babies taste as buttery and delicious as you need. And can help you move past having your big announcement moment stolen by a dear friend. 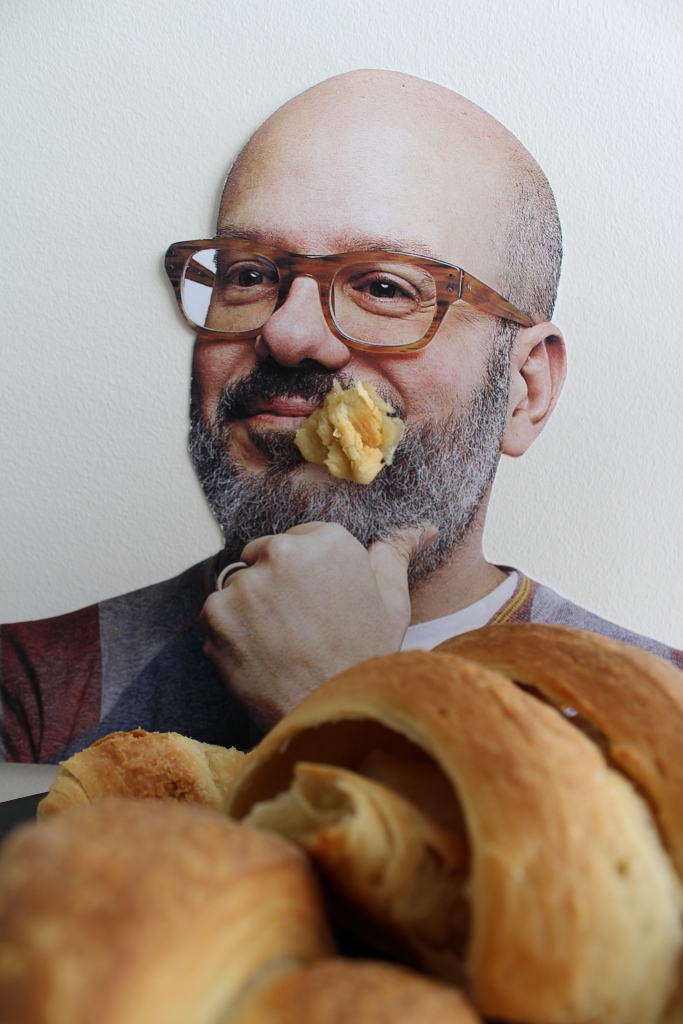 Method
Ok, let’s start with the obvious part – this is a long-ass recipe and you need to start preparing it the day before. Maybe get a coffee and read through before you start it, ok?

Anywho … combine the warm milk, muscovado sugar and yeast in a large bowl of a stand mixer and allow to stand until foamy. This should take between five and ten minutes. Once foamy than a foam party – if they are/ever were a thing – add the flour and salt, and mix on low with a dough hook for about ten minutes, or until smooth, soft and only a little bit sticky. Like sticky in a good way, you know?

Shape into a 4cm thick rectangle, wrap in cling wrap and chill in the fridge for an hour or so.

Now this is where it gets time consuming and fiddly …

Place the dough between two sheets of baking paper and beat mercilessly with a rolling pin until cold yet malleable, before shaping into a 20 x 12cm rectangle. Wrap in some wet kitchen towel and chill while you work on the dough. For the first time.

On that note, unwrap the dough and roll out on a lightly floured surface until it forms a 25 x 40cm rectangle. Place the dough with the shortest end to you and place the butter across the centre. Fold the bottom third of dough up to cover the butter and the top third down over the done.

Brush off the excess flour before pressing horizontally dents along the short width of the  dough. Roll out the dough until it forms a 25 x 40cm rectangle without allowing any butter to escape.

Brush off excess flour, repeat the folding-into-thirds process to form a 20 x 12cm rectangle. Wrap in cling and chill for a further hour.

Repeat the dent, roll, tri-fold process a further three times, so it totals 4 folds. Confused? This is why I told you to grab a coffee and read it out – it is not as confusing in practice. After the final fold, wrap the dough and chill overnight for at least 8 hours.

To prepare the actual croissants – did you forget we were making those – cut the dough in half (chilling the other half until later). Roll out the non-chilling dough on a lightly floured surface until it forms a 30 x 40cm rectangle and brush off the excess flour. Arrange the shortest side of the dough to you, cut in half horizontally and chill another half. Cut the remaining half into thirds, vertically before cutting each rectangle diagonally into triangles.

Starting with the shortest side (aka the base) of the triangle – opposite the tip – and stretch the dough to double the length. Place the triangle on the bench and roll up from the base towards the tip – it should roll over itself three times. Place the shaped croissant on a lined baking sheet, tip side down and curve the ends inwards to form the crescent shape.

Lightly cover the shaped croissants with cling wrap and leave to rest for two to three hours or until puffy.

Remove from the oven and devour immediately with jam, or with ham and cheese and baked a further five minutes. 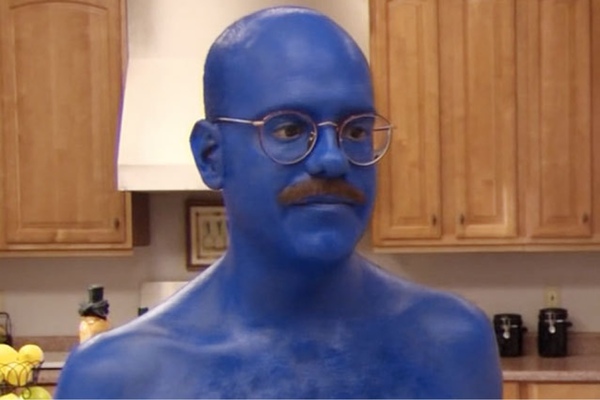 I always knew that my very exclusive and dare I say it, militantly specific guest list for Cinco de Cuatro would raise some eyebrows AND tensions amongst my friends.

But I just didn’t expect Dave to get so cross … get it?!

Sorry, hard to go past such highbrow humour when it comes along. While my boy Dave Cross was feeling a little blue (man group) to miss out, he understood that I had to draw a line somewhere thematically.

Plus, I promised to have him over to coincide with a big announcement (which Jase has spoiled, but whatevs).

What says I can’t wait to work with you on season five?