It has been a busy start to the year catching up with some of my nearest and dearest Golden Globe winners slash friends, that I started to get all sentimental. While my dates with Rach, Az and Nay all carried a certain emotional gravitas, reconnecting with the man that saved my life in the form of Ids really started to make me feel misty. And made me think of one friend I always wish I had been able to save – the divine Natalie Wood.

As you know, Annelie and I were dear friends with the Wagner-Woods and their extended friend group. What you don’t know, is that I was meant to be on the boat with her, Bobby Wags and my ex-lover Christopher Walken that night until Chris and I had a fight when I tried to open up our relationship, and I refused to get on the boat.

“Please Ben! We’ll have such a wonderful time, my love,” Nat asked in her gentle way.

“If Chris doesn’t want me to see any more semen, I won’t be seeing anymore Sea Men,” I shrieked.

That was the last thing I ever said to Natalie Wood.

I whipped out the time machine and charted a course for the summer of ‘80 to spend time with my dearly departed friend, far enough away from her death to not try and interfere.

Since I obviously couldn’t let slip any future details, lest I set off a butterfly effect, I ran the remaining film odds while in the delorean. Obviously I am rooting for Allison Janney and Margot Robbie to take out a one-two punch for I, Tonya, though I firmly think they will split Best Supporting Actress and Best Actress in a Comedy with the Lady Bird crew of Laurie Metcalf and Saoirse Ronan. Which way that splits I’m not sure, but I have a good feeling about my fellow Gold Coaster’s chances. For Drama Frances McDormand or Sally Hawkins will win, though I’d far prefer a tie while Best Comedy or Musical will go to Get Out, unless Greta Gerwig doesn’t win Best Screenplay, in which case it will be Lady Bird.

With no distractions remaining – outside of her impending death – we were free to have a positively delightful date, toasting her then recent Globes win. It was also such a treat to have a less explicit final interaction while devouring my Pastéis de Natalie Wood.

Creamy, rich and wholly delicious, these little babies are the perfect treat for catching-up with friends, gambling and gives you enough energy for the rigors of time travel. 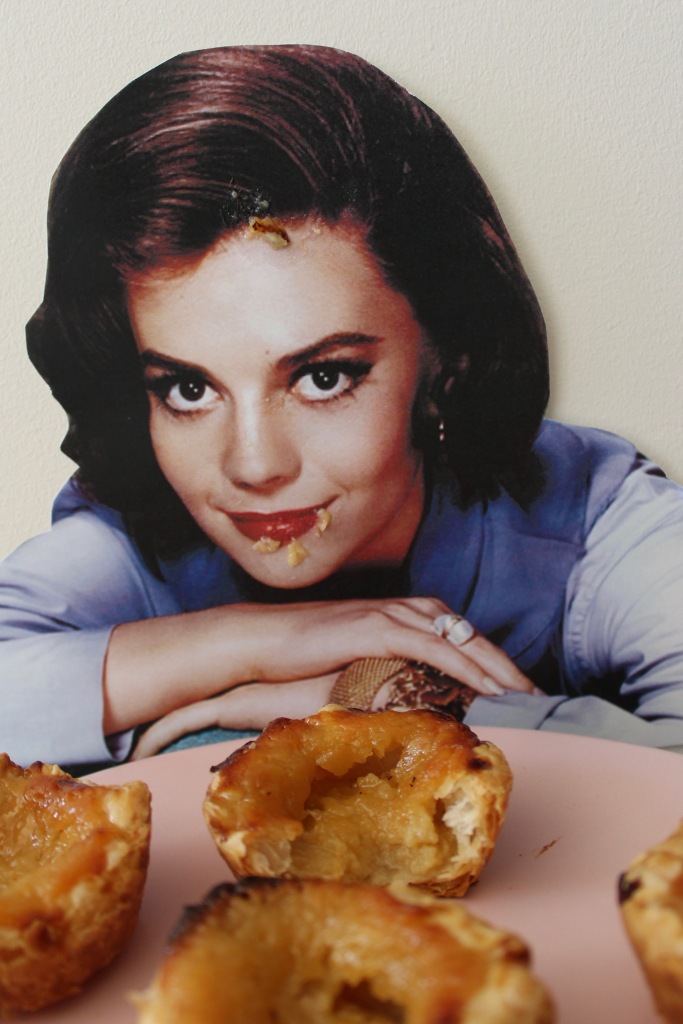 Method
Combine the milk and cinnamon in a saucepan and bring to a simmer before removing from the heat and allowing the quill to steep for a few minutes. Discard the quill and whisk in the vanilla extract.

Place the flour in a small bowl and whisk in about a quarter of the liquid to form a thin roux. Return to the pan with the remaining milk and bring to a simmer once again and whisk the roux back in for a couple of minutes, or until thickening. Turn off the burner, but leave the pan over the heat.

Meanwhile combine the sugar in a pan with 200ml of water and bring to the boil for 5 minutes, stirring occasionally. Slowly whisk the syrup into the milk mixture until you’ve got a thick white liquid. Giggity.

Place the yolks in a large bowl and then slowly add the thick white liquid while constantly stirring until it is well combined. Cover with cling touching the surface and set aside while you work on the pastry.

Cut each sheet of pastry into 9 squares and press into the holes of 2, 12-hole muffin pans, trimming the edges to form neat little cases. Pour the custard into each shell, stopping about 1cm from the top and bake for about 15 minutes, or until golden and scorched in places.

Cool in the pan for five minutes before transferring to a wire rack to cool completely. If you can stop yourself from devouring them instantly, that is.

With our Drop Dead Gorgeous celebrations over, I knew I needed to pull out the big guns as we move into the Fourth of July. And there truly is no big gun, of acting, than seven-time Emmy winner and five-time SAG Award winner – and most importantly, one of my closest friends – Allison Janney.

Speaking of Al, I have a major confession to make that even she doesn’t know – I’ve never seen The West Wing aka the show that won her first four Emmys. While it is super awkward for me to pretend like I’ve seen it all the damn time, I do it for her because I love her … and I will eventually get to it, you know?

I first met Ali while attending Kenyon College together, where we studied under the tutelage of Paul Newman who encouraged us both to continue with the craft. While I left her around the late 80s/early 90s to work on Bev Hills 90210, she caught my eye again in Miracle on 34th Street and I made it my job to get her an EGOT.

While the Oscar eluded her for her performance in Ang’s The Ice Storm, I assumed DDG would finally snatch her the gold for her hilarious performance as Loretta. It was not have panned out, but I did introduce her to Sorki and get her those Es, so it worked out.

We haven’t been able to hang out in a while thanks to her busy schedule with Mom, so it was perfect that our celebrations coincided with the Summer break. She is such a doll and we had the best time – that’s not even including the fact she asked me to play her long lost son / Anna Faris’ brother on the show – reconnecting. Particularly since I made her favourite burgs – my Allibacon Janndeluxe.

Does the name flow off the tongue? Fuck no. Does it even resemble a pun? Of course not … but this burger is legit. Based on one of two reasons to venture to Hungry Jack’s, the Bacon Deluxe – the other being the onion rings – is quite possibly the best Australian fast-food burger. Crispy bacon, creamy mayo, melting cheese and a kick of onion? Perfection.

Now I guess you’re only got one reason to head to Hungry Jack’s … soz guys! Enjoy!

Method
Squeeze out as much liquid from the mince as possible and transfer to a bowl with a good whack of salt and pepper. Scrunch it all together and divide into 8 balls, shaping each into patties.

Heat a large skillet over high heat, reducing to low when scorching. Fry each patty for about 10 minutes, flipping once. At the same time, cook the bacon until crisp.

To assemble the burgers, split the buns and place a patty on the bottom. Top with a slice of cheese, a second patty and the remaining cheese. Add the bacon, tomato, lettuce and a dickload of mayo. Then, devour … if you can wait that long.