Like Unbreakable Kimmy Schmidt itself, we’ve reached the end of the road of our farewell celebration – Hashbrown: The End – and I am starting to get a bit misty, which is inappropriate when you’re meant to be honouring a hilarious show. But after catching up with Carol, Dylan, Ellie and Tituss I was too emotional, so I reached out to my dear friend and icon Jane Krakowski to see if she was free to drop by.

And she obviously was, since you’re ready this.

As you know I met future EGOT Jane in the 80s while co-starring in Starlight Express until my before I was callously cut. Thankfully it was Jane’s undying love and support that saw we through the tragic loss of my role of a lifetime.

Given Jane is a damn comedy icon, I try to see her as much as possible however it has tragically been well over two years since we last got together. As soon as she walked through customs I ran into her arms and started sobbing – some say it was because I missed her so, but we both knew that it was because at the close of today Jacqueline Voorhees will go the way of Jenna Maroney. And that is hard for me to deal with.

Unless Teens does reboot 30 Rock, I guess.

Somehow I managed to pull myself together long enough to drive home, go to the fridge and pull out the ultimate comfort food in the form of a Jane Crackpieski. 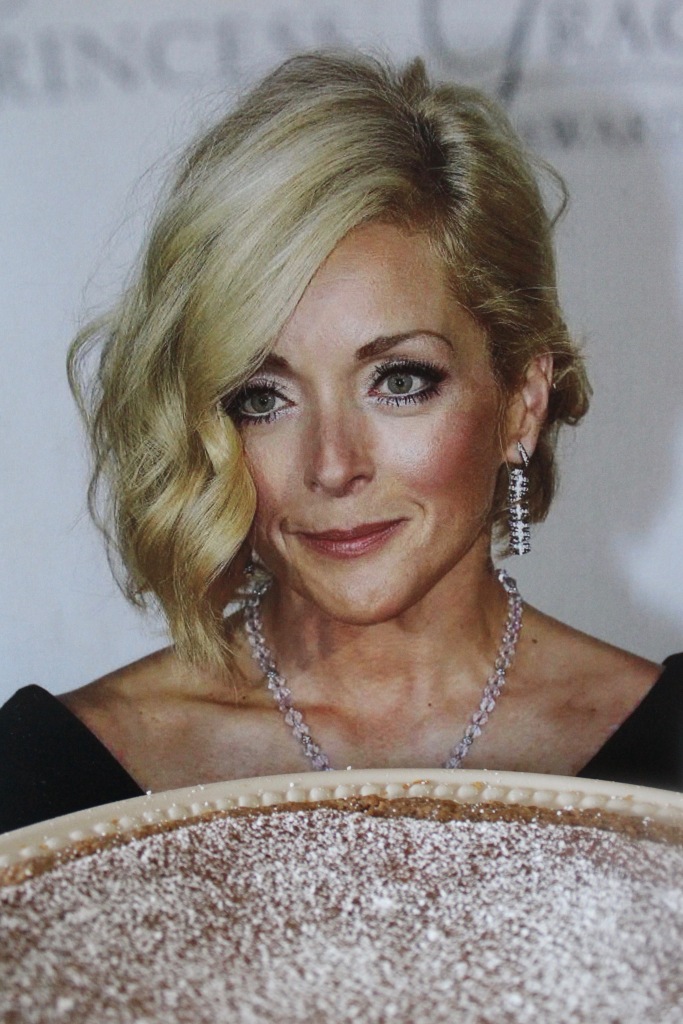 I feel like I am on a bit of a Milk Bar kick at the moment, but you know, when it’s right, it’s right. Any everything they do is right, even when it is a mistake. If you don’t know the story, Christina Tosi made the pie for staff dinner and while it was undercooked and she felt it was a dud, they couldn’t stop eating it and an sweet, addictive icon was born – the Crack Pie®.

And if that doesn’t offer you hope in a post-Kimmy Schmidt world, I don’t know what does.

Kick things off by working on the oat cookie. Cream the butter and sugars using the paddle attachment on a stand-mixer on medium-high for 3 minutes or so, or until light and fluffy. Scrape down the sides and add the egg, before increasing speed and beat for a further couple of minutes.

Add the remaining ingredients and using the paddle, mix by hand until moist enough to return to the mixer to beat on low until just combined.

Dollop the mixture onto a lined baking sheet and flatten into a 1cm thick splat. Transfer to the oven and bake for 15 minutes, or until caramelised, puffed and firmly set. Allow to cool completely.

When you’re ready to get to work on the final product, preheat the oven to 180°C.

Place the cookie in a food processor with a tablespoon of muscovado sugar and ¼ tsp of salt, and blitz until it is the consistency of wet sand. Add 55g of melted butter and blitz until it comes together as a ball. Transfer the ball into a pie dish and firmly pack to cover the edges in an even thickness.

To make the filling, combine the remaining sugars, with the milk powder, corn powder, and salt in the bowl of a stand mixer fitted with the paddle attachment and mix on low speed until evenly blended. Still going, add the remaining butter and mix for 3 minutes or until all the ingredients are moist. Add the double cream and vanilla and continuing mixing for 3 minutes, or until completely combined. Scrape down the side and add the egg yolks, mixing on low speed until it is glossy and combined.

Pour the filling into the pie dish and transfer to the oven to bake for 20 minutes, or until golden brown but still jiggly.

Open the oven door and reduce the oven temperature to 160°C and close the door once it has cooled to that temperature. Cook for a further ten minutes, or until firming around the edge but jiggly in the centre.

Remove from the oven and allow to cool completely before covering in cling and transferring to the freezer to set. Remove to defrost a couple of hours before you’re ready to serve.

When you’re ready for your mind to be blown, dust with icing sugar, grab a spoon and devour. Greedily. Thankful that we exist at the same time that Milk Bar does.

You know how special it is when you’re watching an Academy Award winning performance and just marvel at the perfection unfolding on screen? Think, Cate Blanchett in Blue Jasmine, Heath Ledger in The Dark Knight … and Meryl in everything.

Take that majesty, multiply it by 73, carry the fourteen, square root the power of three and you have a fraction of how electric it is to witness a Tony Award winning performance on Broad-way. And my dear part-time lover Alan Cumming’s performance in Cabaret gave me all the tingles in all the ways … in all the places.

Now full disclosure, I’ve only seen his performance as the MC in its most recent revival given the drunken stupor in which I navigated the 90s – opposite my girl, Academy Award winner Emma Stone, no less – which didn’t actually earn him the Tony Gold … but it was still as electric and sexual as always. Plus, dat arse has not quit in the time away from the role.

Despite the fact I almost got kicked out from the showing after befriending two wild, tipsy women from Washington, I screamed out to Alan that security were manhandling me, he recognised my moans, worked it into the show and got me backstage.

Oh – I should probably mentioned that we hadn’t spoken since having an epic lover’s quarrel at Natasha Richardson’s funeral, so the fact that he saved me getting the boot and allowed me backstage was quite the olive branch. Though we had been friends since meeting on the set of GoldenEye – I was in Sean Bean’s entourage at the time – and I had helped his career reach the next level, so I shouldn’t have been too shocked.

We quickly got reacquainted backstage after the show and have been in regular contact ever since. He was thrilled that I had finally found another way to bow down at the altar of the great white way with Tony Gold, so jumped at the chance to celebrate and run the male performance odds.

I know what you’re thinking – cumin, just fucking cumin? Are you kidding mate? The answer is a firm no, no I am not … as this is delicious. Just spicy enough to be exciting, but not too overpowering to make you want to vom and run out of the kitchen in tears.

What a freaking salesman – enjoy! 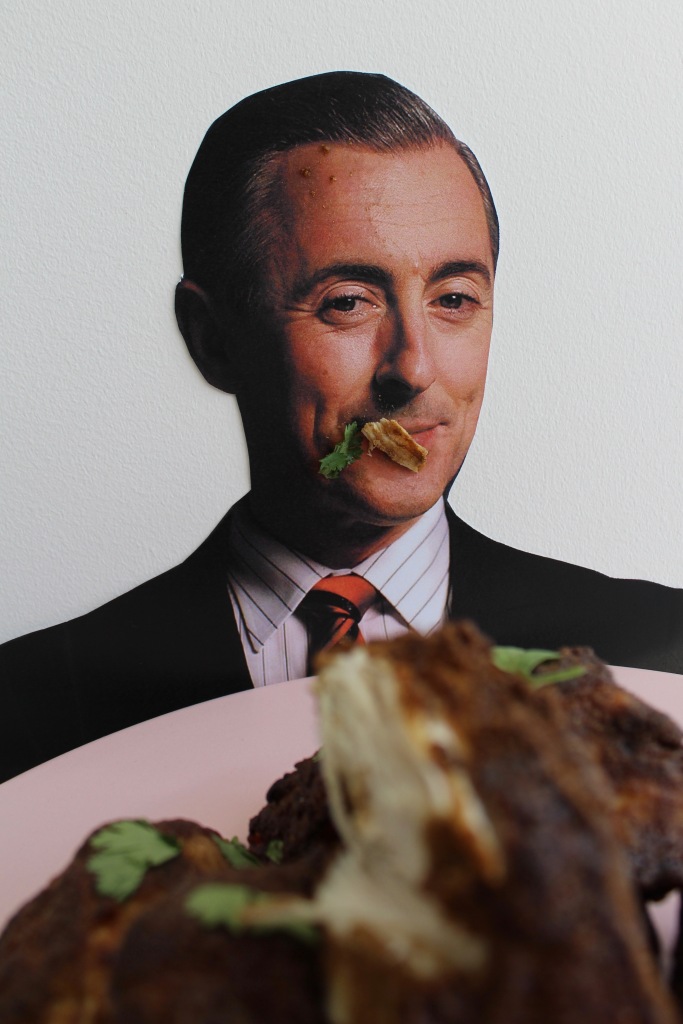 Method
Combine the cumin, lemon, garlic and oil in a small bowl. Add the chicken to the mixture, toss, cover and allow to baste for an hour of so.

Heat a griddle on high until scorching, reduce heat to low and cook the chicken for about five minutes each side, or until cooked through.

Serve on a platter with some natural yoghurt and fresh coriander … to devour.

Can you believe we’re at the Werewolf Bar Mitzvah crescendo already?! It feels like only yesterday that we were hanging out with Tracy, Judah, Scott and Jack – particularly Jack, since it was yesterday.

While we’ve managed to go the week without Teens and Al, we couldn’t celebrate a spooky soiree without the true Queen of 30 Rock, my dear friend, the supremely talented and future EGOT Jane Krakowski.

And by true Queen … would you cross Jenna Maroney?

I first met Jane in the 80s while co-starring in the original Broadway production of Starlight Express until my nemesis ALW cut my part – Spread, the loosest caboose – due to my pornographic interpretation of the roll. It was a rough time in my life, having my inevitable first Tony ripped from my hands and I never would have gotten through it without Jane’s love and support.

Given her egregious snubbing at this year’s Emmys, I really wanted to make our time together special enough to pay back her kindness … and there is nothing more special than a batch of my Jane Cakeghoulski.

Again, cake decoration is far from strong point … but that doesn’t matter when the cake is this good. Which is all thanks to Nigella Lawson, since I converted her Chocolate Guinness Cake into cupcakes because what represents the blackness of death better than a dense, guinness cake? And what is better at making the whiteness of a ghost stand out.

Combine the guinness and butter in a large saucepan over low heat. Once the butter is completely melted, whisk in the cocoa and sugar and remove from the heat.

Whisk the sour cream, eggs and vanilla in a jug and then whisk into the slightly cooled mix, before whisk in the flour and bicarb.

Pour the batter – which is pretty runny, so don’t be alarmed – into 12 lined Texan muffin tins. You could also use normal muffin tins but then you’ll end up with huge muffin tops – which wouldn’t be the worst thing, they are all that. Place in the oven and bake for about half an hour, or until an inserted skewer comes out clean.

Remove to a rack to cool completely.

While it is getting hella cool, beat the cream cheese in a stand mixer until smooth. Add in the sieved icing sugar and double cream, and beat for a further minute.

Dollop the ghastly ghost icing on the blackened cakes, decorate with spooky faces … and then devour.

I ain’t afraid of no ghosts.